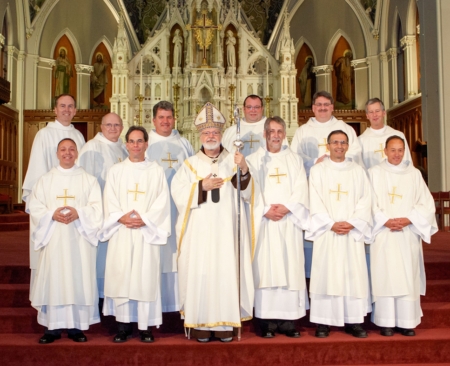 SOUTH END -- Standing before their wives, children, friends and parishioners, 10 men were ordained permanent deacons by Cardinal Seán P. O'Malley on Sept. 22 at the Cathedral of the Holy Cross.

"The Church is blessed to have these 10 fine men answer the call of God," Cardinal O'Malley said in his homily.

"It is a great thrill to have Paulo in this class," stressed Cardinal O'Malley, noting that he is the first member of the Brazilian community to be ordained a permanent deacon.

The deacon, from the Greek "diakonos," meaning servant or minister, is the first of three ranks of ordained ministry in the Church. Among the many functions they perform in parishes, deacons may preside at baptisms, weddings and rites of Christian burial, assist the priest at Mass, proclaim the Gospel and deliver homilies. In addition to parish assignments, each of the new deacons will also assist in the work of one of the central ministries of the archdiocese.

In his homily, the cardinal exhorted the men to a life of service to the Church and to the faithful.

"Christ is our master, but he comes to serve, not to be served," he said. "This, too, is the role of a deacon."

In order to be a servant, deacons must devote themselves to prayer, he said.

"A huge part of your ministry will be praying -- for the Church, for the people of God," he said.

"As preachers we need to delve into the Word of God," he continued, but cautioned the men to not study the Scriptures in a purely academic manner.

"As deacons you must receive the word [of God]. Let it grow and multiply in your hearts," Cardinal O'Malley continued, noting that Jesus must not be "an abstract and historical figure, but a friend -- our best friend."

"The Church has such need for your service," he said, adding that "there are so many divisions in our world and in our Church today."

"We must be ministers of unity in a world of division. We must look for ways to build bridges," he concluded. "Thank you for responding to the grace of vocation."

The rite of ordination to the order of deacon began during the Liturgy of the Word. After the Gospel was proclaimed, the men to be ordained were called forward by Father John Sassani and elected by the cardinal.

Following his homily, Cardinal O'Malley asked each of the men a series of questions. The men then promised respect and obedience to the cardinal and his successors and then lay prostrate in the sanctuary while the congregation prayed the litany of saints.

The ordination to the permanent diaconate was complete after each man again approached the cardinal who imposed his hands on him and silently prayed the prayer of consecration.

The deacons' wives then presented a stole and dalmatic to a priest or deacon who vested their husbands.

Next, the deacons were presented with the Book of the Gospels by Cardinal O'Malley who exhorted them saying, "Receive the Gospel of Christ, whose herald you have become. Believe what you read, teach what you believe and practice what you teach."

The rite of ordination concluded with the kiss of peace given by Cardinal O'Malley, Bishops John Dooher, Peter Uglietto and Arthur Kennedy, and all the permanent deacons present for the ordination.

The deacons' wives brought the gifts to the altar, and the Mass continued with the newly ordained deacons standing at the altar for the first time.

"For me this is a call, first and foremost, to have a real relationship with Jesus," said Deacon Michael Joens. "That's a relationship I hope that as a servant, I can bring to the people I'm called to serve."

"Today is a day full of joy," added Elizabeth Joens, his wife. "It's an overwhelming joy I feel, watching him realize something that has been 14 years in the making."

"What a wonderful celebration for our Church," said Deacon Louis Piazza following the ordination. "How many times in our day do we see so many clergy worshipping together? That's the part that touches me the most," he said.

He praised his wife of 23 years, Carol, for her support throughout the process.

Standing beside Deacon O'Shea, his two children, Molly, 19, and Thomas, 17, smiled, "We are really proud of him. He worked so hard for so long," they said.