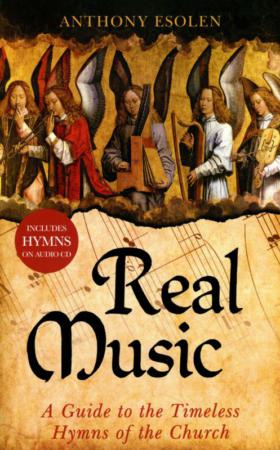 This is the cover of "Real Music: A Guide to the Timeless Hymns of the Church" by Anthony Esolen. The book is reviewed by Nancy L. Roberts. (CNS)

Anthony Esolen, an accomplished literary scholar who is a faithful Catholic, turns his attention to the poetry of our beloved classic hymns in "Real Music." The book and accompanying audio CD captivate at every turn.

Esolen provides astute exegesis of such timeless hymns as "All People That on Earth Do Dwell," "Let All Mortal Flesh Keep Silence" and "Christ the Lord is Risen Today."

The range is truly catholic, since many of the hymns, such as "Nearer My God to Thee" and "For All the Saints," originated with non-Catholic authors and translators and are standards in Protestant and other non-Catholic hymnals as well. As the publisher's note explains," The great hymns, through their orthodox expressions of creedal doctrine, remind us of how much we have in common with our separated brethren."

Another ecumenical feature is the author's use of the King James Bible throughout, though this, he explains, is primarily because "it is incomparable for its beauty and its influence upon English poets and hymnodists. ... The authors of the hymns used it, or had its phrasings and its rhythms in mind when they wrote." He expresses the hope that this "will in turn inspire Catholic poets, using more authoritative versions of Scripture, to go and do likewise."

Esolen, a professor at Providence College in Rhode Island, earned his doctorate in English Renaissance literature at the University of North Carolina at Chapel Hill and is the translator of the acclaimed three-volume Modern Library edition of Dante's "Divine Comedy." His extensive knowledge of literature and theology illuminates his analysis, which is consistently interesting and accessible. For example, in a chapter that focuses on the Nativity, he discusses the meaning of Christina Rossetti's "In the Bleak Midwinter"(1872):

"In the bleak midwinter,

Snow had fallen, snow on snow,

In the bleak midwinter,

"It's nonsense to suggest that (Rossetti's) verses are sentimental," Esolen writes. Rather, "she sees the emptiness of a world without Christ," which is humanity's or "the world's winter." Furthermore, the author says, "the childlike irregularity of the meter should not deceive us. ... The repetition of snow on snow, like the quiet fall of snow on a windless day, suggests the cold of the world, inexorable, deaf to appeal. Nothing changes, nothing can change until the Word is made flesh and dwells among us."

The book's other chapters are also thematic, including hymns associated with, for example, "The Cross and Resurrection," "The Holy Eucharist," "The Holy Spirit," "Penitence and Supplication," "The Glory of God" and "Consolation." In the latter chapter, Esolen explains that "the best Christian hymns of consolation acknowledge both the trials of this world and the joys of the true world, for which this world, pronounced good by the Lord at creation, prepares us." Such a hymn is Henry Lyte's beloved "Abide With Me" (1847), which concludes:

"Where is death's sting? Where, grave, thy victory?

I triumph still, if Thou abide with me."

Included with "Real Music" is a CD containing 18 classic hymns sung by the St. Cecilia Choir of St. John Cantius Church in Chicago, directed by Father Scott A. Haynes, a member of the Canons Regular of St. John Cantius, with organist Walter Whitehouse. It's an inspiring complement to the text, perhaps enjoyed along while you are reading or even on its own as a meditation.

Included are such standards as "Of the Father's Love Begotten" ("Divinum Mysterium"), the 13th-century plainsong, and "Jesus, Lover of My Soul," which Joseph Perry set to the minor key Welsh hymn, "Aberystwyth," in 1876. Charles Wesley, the co-founder (with his brother John and their friend George Whitefield) of the Methodist movement in England, wrote the text in 1738.

Charles Wesley and Blessed John Henry Newman, an Anglican priest who became a Catholic in the 19th century, are well represented throughout, as they were leading hymnodists of their time and beyond. The future Cardinal Newman, of course, wrote "Praise to the Holiest in the Height" (1865) and "Lead, Kindly Light" (1833), both discussed in the book; the latter is included on the CD.

Delightful additions to the CD are Ralph Vaughn Williams' 1906 arrangements of "There is a Land of Pure Delight," based on the traditional English melody; "Who Would True Valor See" ("Monks Gate"), based on a Sussex folk song; and "Come Down, O Love Divine," based on the text by Bianco of Siena in the 15th century.

In sum, this package of informative text and beautiful music is a rewarding way to explore the Catholic faith.

Roberts teaches journalism at the State University of New York at Albany and has written "Dorothy Day and the Catholic Worker" and other books.