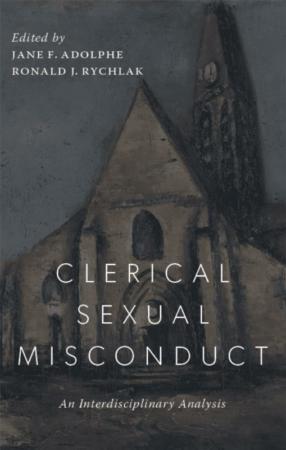 This is the book cover of "Clerical Sexual Misconduct: An Interdisciplinary Analysis," edited by Jane F. Adolphe and Ronald J. Rychlak. The book is reviewed by Deborah Gyapong. (CNS)

The Diocese of Metuchen and the Archdiocese of Newark in New Jersey revealed secret settlements had been made in 2005 and 2007 with former seminarians that McCarrick had preyed upon while he was the bishop in those dioceses. Somehow, despite revelations that several individuals had made internal complaints about McCarrick as early as the 1990s, he rose to become archbishop of Washington and a cardinal.

The precipitous fall of one of America's most prominent clerics was not, however, an isolated incident in 2018. It followed scandals of clerical abuse of seminarians by priests and bishops in Chile and in Honduras. In addition, as the McCarrick bombshell exploded, a Pennsylvania grand jury issued its report, cataloging years of horrendous clerical abuse dating back decades in six dioceses in that state.

McCarrick has since been dismissed from the clerical state. Pope Francis also commissioned a report to explain how someone with such a history of sexual predation could have risen to such heights in the Catholic Church. Though the report is finished, there is no word on if or when the pope will make it public.

Those seeking answers, however, need not wait for the McCarrick report. An international group of Catholic scholars and experts from a range of disciplines have produced their own comprehensive document titled "Clerical Sexual Misconduct: An Interdisciplinary Analysis." Edited by Jane F. Adolphe and Ronald J. Rychlak, it belongs on the shelf of every chancery, seminary library and rectory.

In September 2018, to respond to scandals in Chile, Honduras and the United States, the International Center on Law, Life, Faith and Family invited a group of international experts meet at Ave Maria School of Law in Naples, Florida, to discuss clerical sexual misconduct with males in the Catholic Church. This book is the fruit of that gathering.

The volume is divided into four sections: Part one examines church culture through the lens of the social sciences; part two looks at the cultural influences inside and outside the church that exacerbated the problem of clerical sexual abuse; part three takes a legal and policy perspective; and part four provides pastoral and theological reflections to guide the path forward.

"Clerical Sexual Misconduct" examines the causes of the crisis, both inside and outside the Catholic Church, such as the role that cultural Marxism has played in undermining the family and sexual morality; the impact of the now-debunked Kinsey reports on human sexuality; and the pernicious theories of Wilhelm Reich that undergirded the sexual revolution of the 1960s.

At the same time, seminaries began to shift from a traditional approach to Catholic morality to a therapeutic, psychological model, among other internal shifts, the authors argue.

The experts in this volume blast the prevailing notion the Catholic Church has suffered a pedophilia crisis when in fact rates of pedophilia are far lower in the church than in society at large and, unlike the society at large, the vast majority of the victims of clerical sexual abuse are adolescent males not females.

The book explores the impact of changing views of homosexuality, including the propaganda of the so-called gay gene, and examines how modern interpretations of Scripture have tried to argue there is no New Testament basis for prohibitions against homosexual relationships.

"Clerical Sexual Misconduct" reveals new analysis of data regarding the correlations of clerical sexual abuse on males with a concentration of homosexuals in the priesthood.

Sociologist Father Paul Sullins shows that fewer homosexuals have been ordained since 2000, and consequently reports of sexual abuse against males also have gone down, indicating the wave that peaked in the 1970s has diminished and now receded. But Father Sullins warns the persistent but low level of abuse of girls remains "undiminished."

Other studies of clerical sexual abuse and news reports have often blamed clericalism and the discipline of celibacy for the problem. Both issues are given a thorough analysis in the volume.

Perhaps of most interest to chanceries will be the section on legal and policy matters that looks at canon law, church structures, episcopal accountability, civil law and criminal law in relation to preventing abuse, punishing perpetrators and helping victims.

While comprehensive and packed with scholarly footnotes, "Clerical Sexual Misconduct" offers an engrossing read, accessible to anyone who cares about cleansing the scourge of clerical sexual abuse from the church and in preventing its resurgence.

The analysis is unsparing and multifaceted but at the same time hopeful. The last section of the book looks at ways the Catholic Church can recover her teaching on human sexuality. It looks at the nature of manliness exemplified by Jesus Christ and at the examples set by the lives of saintly priests. It also advocates renewal of a Scripture-based morality that includes the Marian dimension and the power of the Holy Spirit to make living a holy, loving, chaste life possible.

Gyapong is a freelance journalist in Ottawa who covered Canadian national affairs for Catholic media for 15 years. Previously, she spent 17 years at the Canadian Broadcasting Corporation, 12 of them as a television news producer.