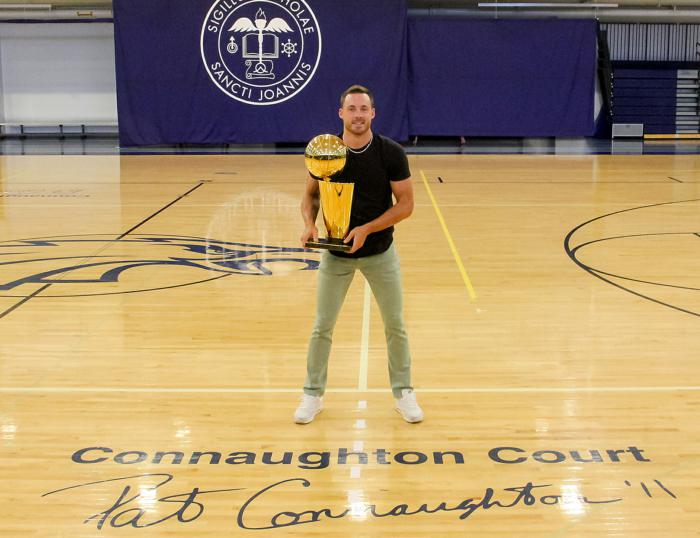 DANVERS -- NBA champion Pat Connaughton has come a long way since his days as a student athlete at St. John's Preparatory School, but his visit to the school on Sept. 3, bearing the 2021 Larry O'Brien NBA Championship Trophy, showed that the Milwaukee Bucks player has not forgotten his Massachusetts roots.

Over the course of the day, Connaughton talked to students, posed for pictures with the trophy, met with members of the school community and the Danvers police and fire departments, and shared lessons he has learned throughout his athletic career.

Connaughton's visit kicked off the school's annual O'Brien Family Student-Athlete Leadership Initiative, a collaborative program for student athletes and adult mentors that involves community service and leadership opportunities as well as workshops and seminars. The initiative is funded by 1988 alumnus Bill O'Brien, who is currently the offensive coordinator for the University of Alabama football team and has also coached the New England Patriots and the Houston Texans.

"It was important to him to support the Prep's idea that student athletes need to be leaders, not just on the field and on the court but off as well, and to represent the battle for the common good and be people who give service to the rest of society. So that's the point of the initiative," said St. John's Prep communications specialist Chad Konecky.

Connaughton is this year's initiative speaker. During his visit to the school, he also answered questions from the media, speaking about his experience as a student athlete and his current status as an NBA veteran.

A native of Arlington, Connaughton is a 2011 graduate of St. John's Prep, where he played football, baseball and basketball. He remains the Prep's all-time leading scorer with 1,713 career points. In August 2017, the school named the basketball court inside their new Wellness Center in his honor. Upon graduating from the Prep, Connaughton attended Notre Dame University, where he played on the Fighting Irish baseball and basketball teams. He served as a basketball captain for two years and played in 139 games, more than anyone in the school's history.

Connaughton now plays for the Milwaukee Bucks, and won his first championship with them in 2021, during his sixth season in the NBA. He is also the founder of the philanthropic With Us Foundation, which gives children access to athletics so they can learn values and life skills through sports.

Connaughton said he inherited his work ethic from his parents, and that his childhood coaches mentored him on what was needed for success.

"At a very young age, I learned to get comfortable with being uncomfortable, and the idea that nothing worth having comes easy and you have to work hard," he said.

He pointed out that youth sports have become less about the athletes and more about money. One of With Us Foundation's goals, he said, is to "revamp" youth sports.

"I think youth sports has become a huge business, and I think a lot of the motivations behind youth sports is on the monetary side. I think the kids' best interest isn't always first," Connaughton said.

He said he believes playing a variety of different sports, instead of focusing entirely on one sport, exposes athletes to different ways of exercising and different groups of people.

"It does so many things to help you become not just more athletic but more well-rounded in the sport you eventually want to have the most success in," he said.

When asked how he feels about being an NBA veteran, Connaughton said it is about working hard on a daily basis and preparing to do the best possible.

"You understand you're not fighting a race versus everybody else," he said.

He explained that the NBA breeds a "competitive nature" not only between teams in the league but also between players on the same team.

He said there is always room to improve in athletics, and that it is about "trying to be the best you can be."

"The areas that we can improve on is what drive us to get better every single day, and to see how we can improve individually and collectively on a daily basis," he said.

Connaughton said it was "awesome" to revisit the Prep campus and "an honor" to talk to the students.

"I owe a lot of the successes I have had to St. John's Prep and the people and the community that it breeds," he said.

He said he can appreciate the resources the students have and the foundation the school gives them, not only in athletics but also in academics and extracurricular activities.

"It's the extracurriculars that they offer, it's all sorts of things that I think most kids realize even more once they've left. But I just hope the kids here take advantage of it while they're here because it does make a big difference as you move forward," Connaughton said.