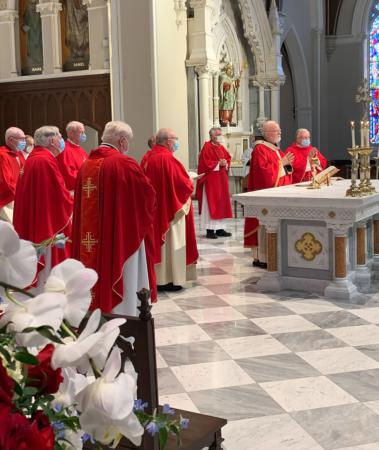 On Sunday, Sept. 12, Cardinal O'Malley celebrated a memorial Mass for George Ryan, who passed away in January, at the Cathedral of the Holy Cross. Pilot photo/CardinalSeansBlog.org

As I shared with you last week, after my visit to Cuba, I returned to Santo Domingo, where the archbishop asked me to preach at the dedication of their new Santuario del Cristo de los Milagros (Sanctuary of Christ of the Miracles) in Monte Plata.

This basilica is the new home of a 500-year-old image of the crucified Christ, which has been credited with many miracles and cures over the centuries. Its original home was in a smaller church, so the government constructed this new, large basilica that seats over 1,500 people.

The building is designed to look like two praying hands.

All the bishops of the island were in attendance for the dedication, as well as the president of the Dominican Republic, Luis Abinader, and his wife, Raquel.

Of course, the liturgy included the consecration of the altar and walls and all the other beautiful rites for the blessing of a new church. The celebration lasted over three hours, but I promise, it wasn't because of my homily!

Following the dedication, I returned to Boston and, on Sunday, celebrated a memorial Mass at the cathedral for George Ryan, who passed away in January.

George had a long life as a devoted husband, father, and grandfather. George would have turned 100 this December, and he and his wife, Mary, were married for 75 years.

He was also a committed and faithful Catholic who was very much involved with the life of the Church. He was a member of the Order of the Holy Sepulchre for nearly 40 years, serving as lieutenant of the Northeast Lieutenancy and later vice-governor general of the Order worldwide. Within the archdiocese, over the years, he served on the boards of our Planning Office for Urban Affairs, St. Elizabeth Hospital and St. John of God Hospice, and he was chair of the Finance Committee of the Caritas Christi Hospital System. (Mary Ryan, one of his children, is continuing that legacy of service as a member of our Archdiocesan Finance Council.)

In addition to many of his friends, family, and members of the Order of the Holy Sepulchre, we were also joined by a large group from the Community of Jesus, an ecumenical religious community on Cape Cod.

On Tuesday, I departed for Rome for meetings of the Pontifical Commission for the Protection of Minors. For many months, we had been holding our gatherings virtually, so it was good to meet once again in person.

On Thursday, I went to greet the new prefect of the Congregation for the Clergy, Archbishop Lazarus You Heung-sik, and welcome him to his new post. The archbishop had studied English at St. John's Seminary when he was a young priest and became good friends with Father Michael Nolan and Father David Barnes while he was here.

When we met, he told me that he remembered me from those days in Boston, when I would come to visit the seminarians from Fall River who were studying at St. John's. It also turns out that he was in the seminary with my good friend, Bishop Alberto Martinez of Paraguay. In fact, he called Bishop Alberto to tell him that I was coming to visit him. So, it was nice to make that connection, as well.