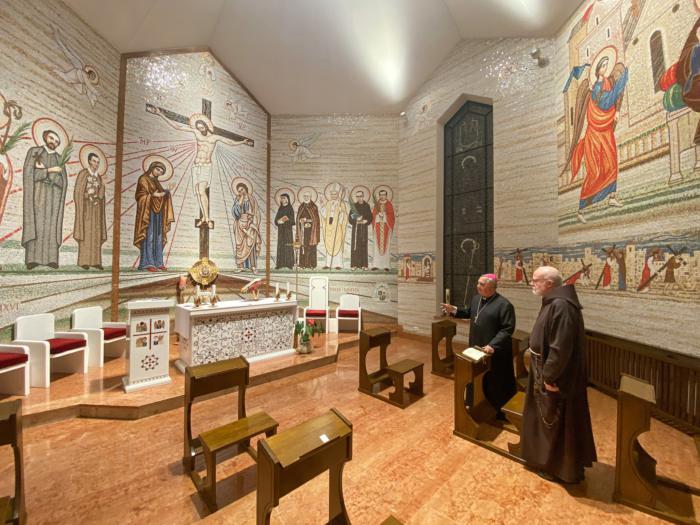 Cardinal O'Malley and Archbishop Salvatore Pennacchio, the Apostolic Nuncio to Poland, are seen in the chapel of the nunciature in Warsaw. Pilot photo/CardinalSeansBlog.org

I spent much of this week in Poland, where we were holding a conference on safeguarding organized by the Polish Bishops' Conference and the Pontifical Commission for the Protection of Minors.

However, on Saturday, before I left Rome, I had an opportunity to celebrate a Mass for the Missionaries of Charity, who run the Dono Di Maria ("Gift of Mary") shelter for women and children within the Vatican.

As many of you know, I have a long association with the Missionaries of Charity, and it's always a joy to be together with the sisters and see their marvelous work.

On Sunday, I arrived in Poland for the conference. This was only my second time being in Poland, which is a beautiful country.

I enjoyed being in Warsaw and was particularly impressed with the Old City, which was completely destroyed by the Nazis but rebuilt exactly as was in medieval times -- it really is beautiful.

Also, I was happy to be able to visit the cathedral where Cardinal Stefan Wyszynski is buried. He had been beatified just the week before, along with Mother Elzbieta Roza Czacka.

Our conference began on Sunday and lasted until Wednesday. It was held at a center that was once a seminary.

We began Sunday night with a Vespers service at which we heard the testimony of survivors of clergy sexual abuse.

Originally, we had been concerned that the pandemic might affect the attendance because, of course, at the present time, it is not easy to bring large groups of people together. However, we had a very good number of people that included not only bishops but also vicars general, religious superiors, vicars for clergy, canon lawyers, and those who are working with survivors of sexual abuse. So, there was quite a cross-section of attendees representing 20 different countries of Eastern and Central Europe.

Over the course of the four-day meeting, there were a number of addresses given that, I think, were all very helpful. There was also a great deal of time for discussion among the participants. After every talk, we broke up into language groups, giving people an opportunity to discuss the topic, share their experiences, pray together, and listen to the testimony of the survivors of sexual abuse.

On Monday, during the course of the conference, we had a virtual meeting of the council of cardinals advising the Holy Father. Our principal topic was the upcoming Synod of Bishops, which will focus on synodality. We hope that our next meeting, scheduled for December, will be in person.

On Tuesday, I was invited to dinner by the Apostolic Nuncio to Poland, Archbishop Salvatore Pennacchio.

They have a beautiful chapel in the nunciature decorated with mosaics of Polish saints.

They also have some Swiss Guard uniforms on display.

He told me that three former nuncios to Poland had gone on to become pope. So, I told him that he'd better be careful, or he might be next!

Outside the nunciature, they have a statue of Pope Pius XI, one of the former nuncios to Poland who became pope.