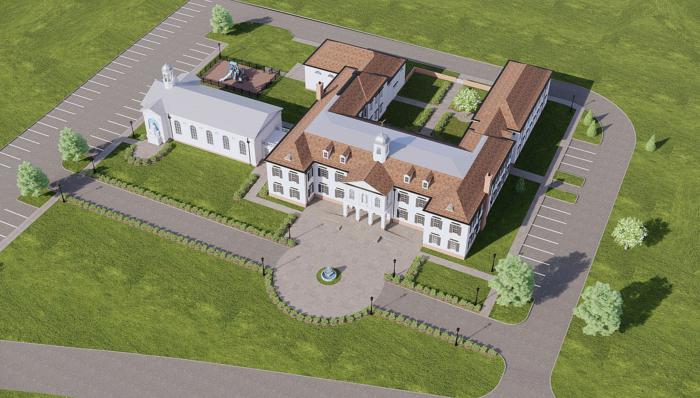 A rendering shows an aerial view of the planned St. Benedict's school building and its chapel. Courtesy photo

NATICK -- When a group of families founded St. Benedict Classical Academy in 2013, they had no idea it would grow so large that they would have to turn away potential students. Now, with over 160 students and a waiting list, the school is making plans to expand its facilities to meet the demand for enrollment.

St. Benedict Classical Academy began in 2013 with about 25 students from kindergarten through grade six in a leased space on Pleasant Street in Natick. The following year, the school moved across the street to its current location. In 2015, the year Jay Boren was hired as the headmaster, there were 63 students. This year, the school has 164 students and had to waitlist over 20. They are projecting 190 for the next school year.

In light of their increasing enrollment, "it really became apparent to the board, and to myself, years ago, that we would need a bigger, more permanent home," Boren said in an April 8 interview.

Board President Dan Bachiochi's family was involved with the founding of the school. He said they chose its location carefully, not wanting to pull students away from existing Catholic schools. They are now leasing two additional spaces on the same street, which has allowed them to spread students out, in keeping with social distancing guidelines during the coronavirus pandemic.

"The demand that we've seen has been amazing compared to the story that you hear in so many other places about Catholic schools having to shut down," Bachiochi said April 14.

Bachiochi released a letter on Feb. 26, announcing the academy's plans to build a new facility to accommodate the growing student body. He explained that for several years the board of directors has been considering how to expand the school.

"Our journey started with our children in mind: what sort of space would further our quest for academic and moral excellence, inviting children to put Christ at the center of their daily lives?" Bachiochi said in his letter.

Initially, they looked into available real estate, but in 2019 a generous gift from a benefactor enabled them to buy Winona Farm, 14 acres of buildable land less than a mile away from the school's current location. They then contracted with Harrison Designs, a classically oriented architectural firm, to develop a plan for the property.

Bachiochi said in his letter that Harrison Designs took on the task of "physically modeling all that St. Benedict's represents" and that the architectural plans "fit well both with the New England tradition and with our Catholic heritage."

The school has calculated that the first phase of this building plan would cost about $8 million. Once funds have been raised and permission from the city has been granted, it would take, by their estimate, about a year and a half to build the new facility.

While preparing a detailed fundraising plan, the school is also launching a coordinated prayer campaign, encouraging families and supporters to pray for the necessary financial resources.

"Everything that we do here starts and ends with faith, and so that's the only appropriate way to start this campaign, I would think," Boren said.

They designed a prayer card asking their namesake St. Benedict to intercede for their community and mailed the cards out along with Bachiochi's letter.

"We really see the prayer as the cornerstone to success," Bachiochi told The Pilot.

Part of the motivation for starting St. Benedict Classical Academy, he said, was a commitment to academic excellence and a desire for community support in passing on the Catholic faith to their children.

"We want them to be productive members of society, contributing to building up the kingdom. We take that responsibility very seriously," Bachiochi said.

According to their parent surveys, Boren said, families choose to enroll their children at the school because of its two-pronged mission of Catholic faith and classical curriculum.

"That's what we're here for, to provide a rigorous classical academic program, partnered with an authentic Catholic faith," he said.

Like the other schools in the archdiocese, St. Benedict Classical Academy switched to remote learning in the wake of the coronavirus pandemic. In the fall, they reopened with five full days of school each week, but they provided curriculum materials for families to use if they kept their children at home.

Boren said that all the parents and teachers have been understanding, abiding by the pandemic protocols without complaint and even with joy. He said the experience has revealed the benefit of "working in a place where everyone is committed to the mission."

"We're here to serve the children and serve our families, and everyone's committed to that. As hard as this year has been, as challenging as it has been, it's also been incredibly edifying to see everyone committed to a common cause," he said.