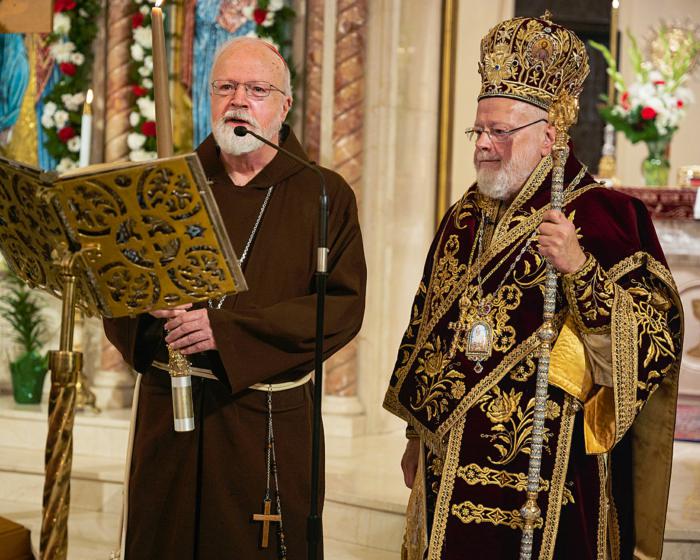 Cardinal O'Malley is seen alongside Metropolitan Methodios as he addresses the Greek Orthodox community during their celebration of the Easter Vigil on May 1. Pilot photo/Alex Mavradis

We were pleased to be joined by Mayor John Leahy and several members of the Lowell Fire and Police departments, who carried the statue of St. Joseph in and out of the church.

When I was a young priest, I taught at Oblate College and the shrine's pastor, Father Michael Amesse, OMI, was a student of mine. He reminded me that once I had posed the question to him, "What is the river that separates the United States from Mexico?" He said he didn't know, but he excused himself because he was Canadian!

I taught many of the Oblates, and it's always fun to hear their recollections of that time. A couple of years ago, when I was in Rome for meetings, I went out during a break for coffee at a local café. A priest walked up to me and introduced himself as the Father General of the Oblates. He said, "Cardinal, I don't know if you remember me, but you taught me when I was a seminarian, and you told me that I spoke Spanish like John Wayne."

It was nice to be back with the Oblates once again. They do wonderful work at the shrine, and the sacramental ministry they carry out there is so important to our archdiocese. We are grateful to the Oblates for their presence and ministry at the shrine.

Orthodox Easter fell on May 2 this year, so I was happy to join Metropolitan Methodios and the Greek Orthodox community of Boston for their celebration of the Easter Vigil Saturday night at Annunciation Cathedral.

It is such a beautiful liturgy, with the blessing of the fire, the lighting of the candles throughout the cathedral, and the singing of the beautiful hymn "Christos Anesti" ("Christ is Risen").

After his homily, Metropolitan Methodios invited me to address the people and bring them Easter greetings on behalf of the Catholic community.

They presented me with the gift of a beautiful paschal candle.

On Wednesday, I participated in a conference hosted by the Italian ambassador to the Holy See, Pietro Sebastiani, on the topic of child protection in Italy. A number of the members of the Pontifical Commission for the Protection of Minors were also invited to participate, including Father Hans Zollner, Dr. Ernesto Caffo, and former commission member Baroness Sheila Hollins.

The principal venue for the meeting was the historic Palazzo Borromeo in Rome, which houses the Italian Embassy to the Holy See. Those who attended in person gathered there while the rest of us participated virtually.

There were a number of talks during the conference. I was particularly interested in remarks by the representatives from Google, Facebook, and Microsoft, who spoke about the dangers children face from online predators and what they're doing to help protect children. Some of the statistics they presented were just shocking. They say that one-third of internet users are children, and far too many of them are vulnerable to grooming and other such predatory behaviors online.