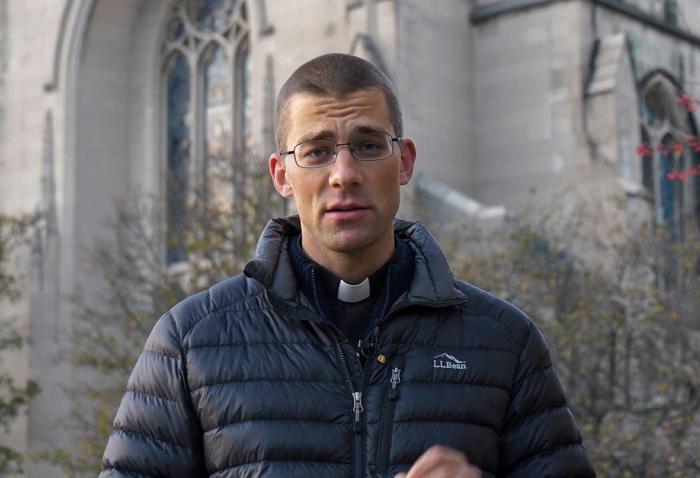 BRAINTREE -- There are plenty of ways to learn about different vocations. People interested in the priesthood or religious life, or even the general idea of what it means to have a calling from God, can learn from any number of books, witness talks, and other resources. But "Scivias," a new video series written and produced by Father Michael Zimmerman, aims to provide something unique.

In this series, Father Zimmerman does not merely speak about his own journey or share reflections about vocation. He does both of those things, but he also articulates the difficult questions, struggles, and insecurities that come up in discernment, and offers specific advice for how to pray and practice a good spiritual life during that process.

As he addresses these topics, the videos' dynamic cinematography shows him visiting various Boston-area locations related to his personal interests and events in his life, providing clear images for the backdrop of his stories and reflections.

In a May 14 interview, Father Zimmerman said that one goal of the project is to be "incarnational."

"That's what I think is different about this series compared to other vocations resources out there, trying to make things very concrete and practical," he said.

He conceived the idea for the project a year and a half ago, when he became the assistant director of the archdiocese's Office of Vocations. He wanted to offer something more, not only for the people he was able to speak with personally, but also for the countless others he might never meet.

When the pandemic lockdown began, he said, "it suddenly became all the more pressing as a way to reach people, but also the questions people had became more timely," as more people began to reflect on their purpose in life.

Father Zimmerman described the video series as "a guide to help somebody work through the questions related to discernment, the questions of what's going on in my own heart, my fears, my desires. How do I sort all that out; how do I hear God's voice?"

"Scivias" takes its name from the title of a work by St. Hildegard von Bingen. It is derived from the Latin phrase "Sci vias Domini," meaning "Know the Ways of the Lord." Besides providing a fitting title, Father Zimmerman said St. Hildegard is also an inspiration for other aspects of the series -- including the music, which includes some of her compositions.

"Scivias" premiered online on April 13 through the Vocations Office's Facebook page (@VocationsBoston) and YouTube channel (VocationsBoston). Episodes are currently being released every Tuesday and the series will eventually consist of 27 episodes, each three to five minutes long.

The series is split into three parts, moving from more universal aspects of vocation to the specific calling of the priesthood.

"I would say there's something in there for everyone, regardless of whether somebody is discerning or they're just trying to live their vocation out more fully," Father Zimmerman said.

He said the first part of the series is about "gaining a better understanding of our heart." This involves examining the "foundations" of one's identity, as well as any insecurities related to it. To this end, three episodes focus on identifying one's sense of self, hope of happiness, and source of love.

"I would say these are topics that are essential for any Christian to grow in their faith, in learning to place our lives in God's hands in a much more concrete, intentional way. And that gives us the freedom to say yes to what he asks of us, because we begin to grow in our relationship with him. We know that we can trust him and that he's good and he loves us," Father Zimmerman said.

The second part of the series is about understanding the idea of self-gift, "that my life is a gift meant to be given and my vocation is the way I'm called to do that," he said. The third part of the series will focus specifically on the call to the priesthood.

Father Zimmerman said his greatest concern is "to help people grow in holiness, to become great saints." In that larger context, "along the way that will involve people pursuing their specific vocations with courage and generosity."

"I think if people start watching the series they'll definitely enjoy and get something out of it. So, keep us in your prayers, and we'll be praying for everyone who watches it as well," Father Zimmerman said.