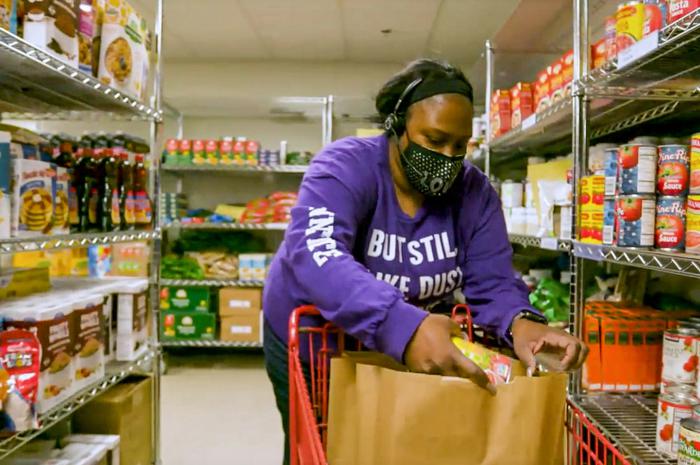 Volunteer and client Donnette McManus shares her experience of the help offered by Catholic Charities in a scene from the virtual Spring Celebration. Pilot screen capture

BOSTON -- Catholic Charities of the Archdiocese of Boston held its annual Spring Celebration fundraiser on May 20 with a virtual program dedicated to the fight against food insecurity, a crisis that worsened significantly during the coronavirus pandemic.

"It was inconceivable to me, at that time, that we would face a year of virus surges, isolation, and the unimaginable toll of this global health crisis," he said.

According to statistics shared at the beginning of the event, food insecurity increased by 59 percent after March 2020. Before the pandemic, over 200 clients visited Catholic Charities' Yawkey food pantry each week; but during the pandemic, over 250 came every day.

MacKenzie spoke about the hardships that people faced during this time, and how Catholic Charities continued to provide its services even as the demand grew.

"Catholic Charities never closed, and our commitment to our clients never wavered. Through it all, your heartwarming response and incredible generosity allowed us to care for thousands of people with compassion, dignity, and respect. Everyone at Catholic Charities and those we serve will be forever grateful," MacKenzie said.

The roughly half-hour program, which was hosted by WCVB Channel 5 anchor Anthony Everett, periodically named "Catholic Charities champions," volunteers who helped to feed their neighbors during the pandemic.

A lengthier testimony came from Catholic Charities client and volunteer Donnette McManus, who shared how the organization helped her in a time of need.

"In my prior life, I took a lot of things for granted," McManus recalled.

She grew up in a working-class family, had a college education, and worked many different types of jobs. But everything changed in July 2019, when McManus' sister died unexpectedly after giving birth to her youngest child. McManus took in her sister's children, becoming a single mother of four at the age of 48.

She did not qualify for many services, because she was "in the middle," but she found that Catholic Charities had programs for low-income families, which helped her keep food on the table.

"I'm always going to be there for Catholic Charities because they were there for me," McManus said.

"In my years at Catholic Charities, I have never seen a time like this. I have seen just the numbers increase every year, but I've never seen the numbers multiply as much as they did during this past year. And yet, no one has been turned away, because we always make sure that we have enough to serve those in our communities," Chambers said.

After the panel discussion, Catholic Charities introduced its plan to develop a new Food Security Network across Eastern Massachusetts, which would move food efficiently from large-scale suppliers to local pantries in areas with the greatest need.

"Our vision is to work together with the parishes and volunteers across the archdiocese, along with our nonprofit partners, to create a regional state-of-the-art food distribution network," MacKenzie explained.

In the short term, this plan involves establishing modern choice pantry hubs in Lynn and Dorchester, which will serve as models for future locations.

He noted how "appropriate and fitting" it was to celebrate the Catholic Charities champions, who, like the medical professionals who have been recognized over the past year, have stood "at the front lines in times of crisis, stepping forward when people are in desperate need."

"A person cannot begin a journey to sustainability until they have the basic resources to be able to stand and take the next step. Catholic Charities heroes extend a supportive and helping hand for people to make that next step," Cardinal O'Malley said.

He thanked the viewers for their support, saying it was "your generosity and commitment that makes this life-saving work possible."

The event concluded with a rendition of Kirk Franklin's "My World Needs You" performed by the Liturgy Arts Group of Boston College, directed by Meyer J. Chambers.

The 2021 Catholic Charities Spring Celebration, the full panel discussion on food insecurity, and a program booklet can be viewed at ccab.org.