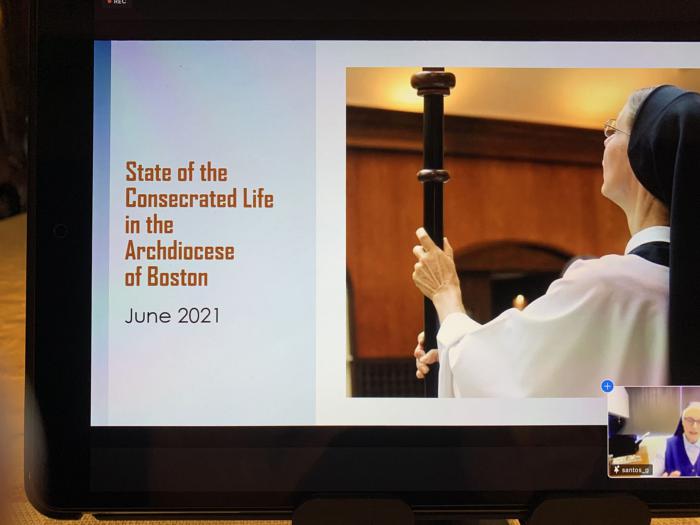 On Wednesday, June 2, Cardinal O'Malley participated in a meeting with the major superiors of men's religious communities in the archdiocese, organized by the delegate for religious, Sister Germana Santos. Pilot photo/CardinalSeansBlog.org

You may recall that last week I was in Ohio for the funeral of the father of one of our Capuchin brothers, Brother Tommy Pilotta. On my way back to Boston, I stopped in New York to attend a small gathering of friends to celebrate the 50th anniversary of the priesthood of Brooklyn Auxiliary Bishop Octavio Cisneros.

Bishop Cisneros and I have been friends for decades, so it was a great joy to be with him and congratulate him on this happy occasion.

I returned to Boston on Memorial Day, and on Tuesday, I participated in a virtual meeting of the USCCB Committee on Pro-Life Activities. During our meeting, we discussed the materials that the committee has prepared for the special Year of St. Joseph that we are currently observing.

One element of that is emphasizing St. Joseph's role as a foster parent. Of course, one of our consistent themes has been to encourage adoption.

We also had a great deal of discussion about the efforts to prevent passage of the Hyde Amendment, which prevents federal money from being used to pay for most abortions. Last week, I issued a letter on the need to mobilize our people around this important issue, and I once again encourage you to add your name to the petition at NoTaxpayerAbortion.com, supporting the Hyde Amendment.

On Wednesday, we had one of our regular gatherings with the major superiors of men's religious communities in the archdiocese, organized by our delegate for religious, Sister Germana Santos.

There were about 30 communities represented at our gathering, which we began with midday prayer. Afterward, we heard a lovely talk by Mother Sofia, the abbess at Mount St. Mary's Abbey in Wrentham, on the seven Trappist monks who were martyred in Algeria in 1996.

We then had a time of dialogue and sharing of information among the different communities.

It was also an opportunity to acknowledge the consecrated men who contribute so much to the life of the Church and thank them for their charisms and the witness of consecrated life they give through their ministries, which touch the lives of so many people in the Archdiocese of Boston.

Meeting of the bishops of the province

Thursday, we held a meeting of the bishops of the province to discuss the timeline for lifting the dispensation from the obligation to attend Sunday Mass. Of course, we were caught somewhat unaware when Gov. Baker announced last month that pandemic restrictions in Massachusetts would be lifted as of May 29 since it had originally been said that they would remain in place until August.

However, we know that, for some, there will also be a period of adjustment. So, we are preparing catechetical materials to help people to understand the meaning, importance, and centrality of the Sunday Eucharist in our lives as Catholics.