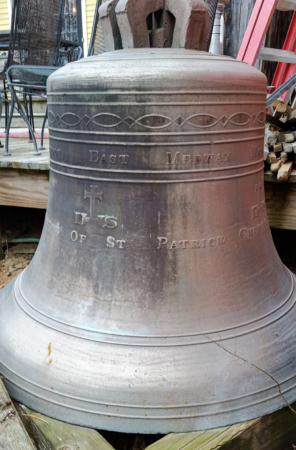 Plans are underway to return the Holbrook bell to its original home in St. Patrick Church in Lowell. The bell hung in the church from 1841 to 1889. Pilot photo/courtesy David McKean

LOWELL -- As St. Patrick Parish approaches its 190th anniversary, and the City of Lowell marks 200 years since the first Irish laborers came to work there, a part of their history is being restored to its original home: a 180-year-old bell that has called people to prayer, action, and community at different times in the city's history.

The bell, which originally hung in the steeple of St. Patrick Church, came to the parish in 1841 when the pastor at the time, Father James T. McDermott, purchased it from the Holbrook Bell Foundry in Medway. It has changed homes a few times since then, moving to a firehouse and then to a private citizen's home. Now, arrangements are being made to display the bell on the church grounds.

To the people of St. Patrick's and the wider community known as the Acre, the bell is an emblem of Lowell's Irish roots and the contribution that the Irish made to the city's industrial growth.

In April 1822, 30 Irish laborers walked from Charlestown to present-day Lowell, which at the time was East Chelmsford. City manager Kirk Boott provided them with tools and money for food, but because they were considered transient workers, no accommodations were made for them. They camped outside the new town on company-owned property, which came to be known as the Paddy Camps, in the section of Lowell that is now the Acre.

The laborers returned to their families in Charlestown at the end of the construction season. The following year, they came back to work and some brought their families with them. Identifying themselves by the regions of Ireland they were from, the laborers from Cork settled in one section while those from Connaught settled in another, and there was sometimes infighting between the camps.

It's said that Boott's Irish housekeeper told him the way to bring peace between the camps was to bring in a priest. Allegedly, when Bishop Fenwick came to Lowell to see about founding a parish, Boott said to put the church in between the two camps.

Bishop Fenwick dedicated St. Patrick Parish in 1831, making it the first Catholic church in Lowell and the third oldest parish in the Archdiocese of Boston. The church was designed by Patrick Keeley, the same architect who designed the Cathedral of the Holy Cross in Boston.

"St. Patrick's Church is the symbol that these transient workers were in the city to stay, and the bell is one of the few remaining parts of that church," said Raymond Leavitt, a member of St. Patrick Parish, in an email to The Pilot.

Leavitt explained that the Holbrook bell, as well as other bells, played a significant role in the lives of Irish Catholics in the Acre. It signaled the time for meals, work, and prayer, including the Mass and the Angelus.

In 1889, the Holbrook bell was replaced by a set of chimes. It was sold to the City of Lowell and hung in the Mammoth Road Fire Station, where it was used to call firefighters together. When the firehouse was decommissioned a century later, the bell was removed and stored at Soucy Iron Works in Dracut. A former Soucy employee took the bell for safekeeping upon his retirement.

Because the Holbrook bell is city property, it could not be released without authorization from the City of Lowell. So Dave McKean, a member of St. Patrick Parish's Irish Cultural Committee, approached city councilors Rodney Elliott and Rita Mercier at a St. Patrick's Day celebration to seek their support in returning the Holbrook bell to the church. The councilors made a motion on March 23, and on April 27 the council unanimously voted to permanently loan the bell to the parish.

Councilor Elliott said he was glad the matter was brought to their attention.

"I think it's important for us to put this on display back in its original home" in remembrance of the Irish laborers, "who are credited with building the canals, the factories, the boarding houses and all," he said.

April 6, 2022, will be the 200th anniversary of the arrival of the first group of Irish laborers in Lowell. Since then, generations of immigrants have settled in the Acre throughout the city's history. French Canadians who moved there set up Little Canada. St. Patrick Parish later became home to a Southeast Asian community, holding Mass in Vietnamese and Khmer for many years. The Hispanic community at St. Jean Baptiste Parish merged with St. Patrick's when their church closed, and St. Patrick's is now welcoming the Acre's Burmese community.

In a May 11 email, McKean said that to him, the Holbrook bell represents "the continuity of our community."

"Think how many times that bell announced a marriage, tolled for the dead, or called the Acre neighborhood to prayer. The bell represents the contribution St. Patrick's has made to Lowell over the generations and into the future," he said.

St. Patrick Parish hopes to display the bell on the church's front lawn. Plans for moving the bell and raising funds to display it are still under consideration.