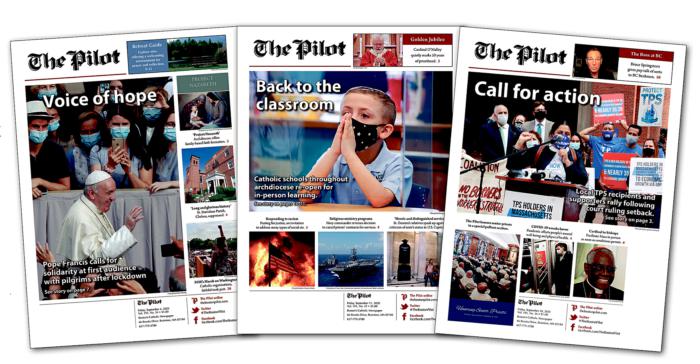 The winning entries in the Best Front Page category.

BRAINTREE -- The Pilot was once again honored at this year's Catholic Press Awards.

Each year, the Catholic Media Association invites submissions from Catholic newspapers, websites, and magazines that are judged by a panel of independent experts for excellence. The Pilot has been honored with awards each year since 2002.

The award winners are typically announced at the annual Catholic Media Convocation. However, as in 2020, this year's awards were once again presented virtually.

The team Editor Antonio Enrique, Managing Editor and photographer Gregory L. Tracy, and Production Manager Wilkins received third place for Best Front Page. The award is based on a series of front pages run in the course of the year.

One judge wrote, "I love the photo-heavy layout. It is incredibly effective here. It is made to look easy, but it is actually very difficult to do. Excellent use of columns and grids. The colors are sharp and bold. The images are clean, vibrant, and active. The covers just make me want to open the issue."

Tracy earned third place in the category of Best Story and Photo Package for "A Triduum Like No Other," which featured photography and reporting focused on Holy Week and Easter liturgies celebrated in a nearly empty Cathedral of the Holy Cross during the pandemic lockdown.

"This article includes gorgeous, crisp photos that draw the eye across the piece. The writing is thorough and clean, giving the clear message of light and hope in dark times," the judges commented.

Tracy also received an honorable mention for his photograph "An Empty Cathedral for the Mass of the Last Supper," which was featured on the cover of the April 17, 2020, issue.