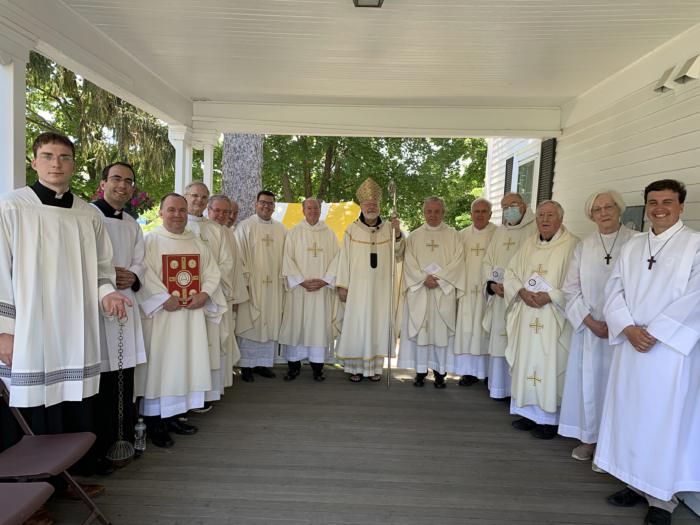 On Sunday, June 13, Cardinal O'Malley, alongside many priests who were from the parish, visited St. Paul Parish in Hingham for a Mass to celebrate the 150th anniversary of the parish. Pilot photo/CardinalSeansBlog.org

It is with great joy that I note that this week we are marking Juneteenth -- the day commemorating the end of slavery in the United States -- as a federal holiday for the first time.

This is indeed an important moment for our country. Just as our other great national holidays are an occasion for Americans to pause and reflect on the events and ideas that led to their establishment, it is my hope that the annual commemoration of Juneteenth will be a moment for this and future generations to consider the evils of slavery and historical and ongoing racism that has afflicted our nation.

As I said in my letter to the people of the Archdiocese of Boston on systemic racism, issued in June of last year, "Racism and slavery find a common nexus in this country, the denial of the humanity and dignity of other persons. As a nation, we abolished slavery legally, but we have not dealt with its enduring legacy. If we reject slavery then we must reject and denounce the dehumanizing attitudes that foster discrimination, inequality, and violence."

The fact that this measure passed with near-unanimous support by both houses of Congress is an encouraging sign that perhaps our nation has, at long last, come to the point where we are ready to confront this enduring legacy of racism in a serious way and promote justice for all peoples.

He was the longest resident of Regina Cleri, having been there for over 25 years. He was very beloved by all those at Regina Cleri, and many said what a wonderful companion he was to live with there. He will be sorely missed.

On Sunday, I went to St. Paul Parish in Hingham for a Mass to celebrate the 150th anniversary of the parish.

The history of the Church in Hingham is a very interesting one, and they have a wonderful history of the parish on the parish webpage. It's one of the best I've ever seen. I told all the parishioners who hadn't seen it that it was their assignment to log on and check it out.

Of course, like a number of our parishes celebrating their sesquicentennials, the anniversary is a time to reflect on what it would have been like to be a Catholic in the archdiocese 150 years ago. It was the aftermath of the famine in Ireland that brought so many immigrants here shortly after the Civil War. People were experiencing many difficulties and hardships, and yet their faith led them to form these parish communities and build beautiful churches.

St. Paul Church was a creation of Patrick Keeley, the same architect who built the Cathedral of the Holy Cross along with about 700 other churches and about 20 cathedrals.

It was also very interesting to see how the school was formed with the support of the Knights of Columbus and the Sisters of St. Joseph. Of course, the school is still thriving.