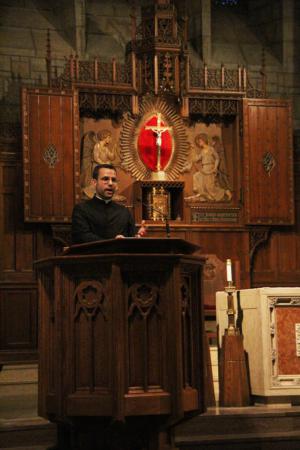 BOSTON -- As part of the archdiocese's Year of the Eucharist, the Oblates of the Virgin Mary held a four-day mission at St. Clement Eucharistic Shrine, featuring times of prayer before the Blessed Sacrament and talks from seminarians about the history and theology of Eucharistic Adoration.

Brother Nathan Marzonie, OMV, and Brother Leland Thorpe, OMV, took turns speaking each day of the mission, which took place Aug. 4-7. Their talks addressed what Adoration is, why it is practiced, and how to make a Holy Hour. The talks were livestreamed so that people could watch remotely or at a later time.

One of the goals of the mission, Brother Nathan told The Pilot, was to invite regular adorers to return to Eucharistic Adoration at the shrine, since the outbreak of the coronavirus pandemic disrupted this practice for many. They also wanted to invite people who have never tried it before and provide catechesis about the Eucharist.

On the first night, Aug. 4, Brother Nathan spoke about "Why We Have Adoration." He listed three essential aspects of Adoration: presence, communion, and sacrifice.

Brother Nathan said this is because people desire communion, or intimacy, a sharing of life. He likened contemplation of the Eucharist to sitting in silence with a friend, enjoying each other's company even without saying or doing anything.

Brother Leland built on these points in his Aug. 5 talk on "What to Do in a Holy Hour," in which he offered a "sketch" of the spirituality of Eucharistic Adoration.

It was a First Friday of the month, so Brother Leland spoke of the First Fridays devotion to the Sacred Heart and the messages of Christ to St. Margaret Mary Alacoque. Jesus told her how he suffers when there is no one upon whom he can pour out his love. Brother Leland said part of the spirituality of Eucharistic Adoration is to be someone who receives that love.

"Our Lord has allowed his heart to be opened for us. Should we not respond by opening our hearts to him and entering into that place of intimate friendship with him?" Brother Leland said.

On Aug. 6, Brother Nathan talked about "How Adoration Changes Everything." He addressed why Adoration is important not only for the individual adorer but for the entire Church and the whole world.

"The Mass brings this gift of thanksgiving into the world. Adoration extends the worship from the Mass throughout time. And our whole life extends the gifts that we receive in the Eucharist and in Adoration throughout the whole world. And it becomes our mission, then, to take those gifts out to the world," Brother Nathan said.

He spoke about the universal call to holiness, which is "the source of the sanctification and salvation of the whole world."

"We're called to bring this holiness, these gifts that we receive from God, the gift that we have of friendship with him, and to extend that to the whole world. And this is why Adoration is so important for everyone, whether everyone knows it or not," Brother Nathan said.

He shared a reflection on the passage from John 4 about Jesus meeting with the Samaritan woman at the well. Brother Nathan said he considers this the archetypal passage about someone encountering Jesus, which has an immediate effect on both that individual's life and on the lives of others.

Brother Nathan also spoke about the history of St. Clement Eucharistic Shrine, which has been the Eucharistic shrine of Boston since 1944. Over the years, there have been periods when the shrine was able to hold perpetual Adoration. Most recently, perpetual Adoration resumed in 2009, but had to end in 2020 due to the coronavirus pandemic.

On the morning of Aug. 7, Brother Leland gave a closing talk, recapping what he and Brother Nathan had covered the previous three nights and expanding on how to put it into practice. He explained their hope to return to perpetual Adoration and encouraged everyone to prayerfully consider committing to a Holy Hour.

He also explained how to use their online system for scheduling Holy Hours to ensure someone is always present with the Blessed Sacrament. Currently, the shrine is open for Adoration eight hours a day, from the midday Mass until 8 p.m. When those hours are filled, they plan to add more, working their way up to 24 hours. If people cannot commit to a weekly timeslot, they can sign up to be substitute adorers. Those who cannot make it to their scheduled Holy Hour are asked to find a substitute. Adorers are to sign in online so the Oblates can make sure someone is present.

"What an amazing gift that we're offered. Let's receive it. Let's welcome the gift that Our Lord wants to give us. And then let's not keep it to ourselves. Let's not keep this a secret. Let's share this with others," Brother Leland said in closing.

After each of the evening talks, the shrine remained open a while longer than usual so that those attending could stay and pray.

Speaking to The Pilot after the third night of the mission, Brother Leland said what surprised him was how people passing by during this extra time would come in to spend time with the Blessed Sacrament.

"I find that this really beautiful sign from God that he wants this and he's blessing this," Brother Leland said, adding that God is "sending people here in ways that we can't anticipate."

"If you're on the fence, please just come. Spend some time with our Lord. Be part of this rebuilding, this renewal of perpetual Adoration here in the heart of the city," he said.

The livestream recordings of the Year of the Eucharist Mission can be found on the Facebook page of St. Clement Eucharistic Shrine. Information about signing up for Adoration at the shrine is available at www.omvusa.org/st-clement-shrine/adoration/join-us.