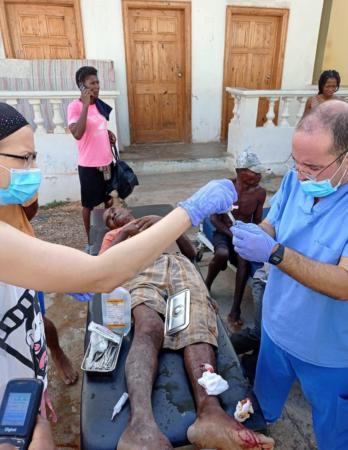 BRAINTREE -- Recognizing the suffering of the Haitian people and growing need for assistance following the August 14th earthquake, Cardinal Seán P. O'Malley has asked that a special collection for Catholic Relief Services and the Church in Haiti be taken the weekends of August 21-22 or August 28-29 in all parishes in the Archdiocese of Boston. Parishioners are asked to address their checks to their parish, with "Haiti Earthquake Relief" in the memo.

"The people of Haiti are suffering," said Cardinal Seán. "The earthquake has caused a significant loss of life and many have been injured. Desperation grows by the hour with the disruption in communications as well as basic services such as water, sanitation, and medical supplies. Our parishioners have long answered the call when natural disasters have struck in other parts of the world. The Haitian people need us now."

Catholic Relief Services (CRS) announced that it "is sending teams to provide clean water, sanitation, shelter and emergency supplies in response to a major earthquake that struck southern Haiti early Saturday morning. While the severity of the damage is still being determined, with communications down in parts of the country, hundreds of deaths have already been reported as well as extensive damage to buildings and homes."

The parishes of the Archdiocese of Boston have consistently stepped forward during times of natural disasters to assist our brothers and sisters in other parts of the world. Following the 2010 earthquake in Haiti, where CRS reports "more than 300,000 people were killed and another 1.3 million left without homes", the parishioners of the Archdiocese generously raised more than $2 million for relief efforts.