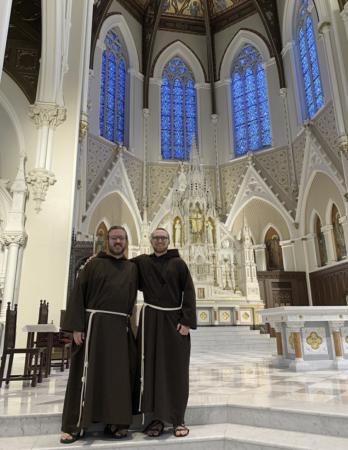 Brother Connor and Brother Chris during their visit to the cathedral on Thursday, Aug. 19. Pilot photo/CardinalSeansBlog.org

This week, we were very saddened to learn of the death of Bishop Guy Sansaricq, the first Haitian-American bishop in the United States. He was the retired auxiliary bishop of Brooklyn, which has the second-largest Haitian community in the United States after Miami and followed by Boston.

In addition to his long ministry in Brooklyn as a priest and then auxiliary bishop, Bishop Sansaricq was such an important figure in the Haitian diaspora for decades. In fact, when I started the Haitian ministry as a young priest in Washington D.C., then-Father Sansaricq was very helpful to me.

He was a good friend -- and he will be sorely missed.

Last Friday, I traveled to Pittsburgh for events with my Capuchin province.

Friday, we had a meeting in preparation for our provincial chapter next year. It was interesting to hear the different themes and ideas that the brothers would like to discuss.

I was also pleased to hear the positive report of the provincial, particularly on the situation with vocations in our province. It was very encouraging.

Then, on Saturday, we celebrated the solemn profession of Brother Edgar Pereira.

His family were parishioners of mine when they first came from El Salvador. I had also married his aunt and uncle, who were with us at the celebration -- about 50 years ago. So, it was nice to make those connections again.

By Sunday, I was back in Boston and went to St. Leonard's Church in the North End for a Mass marking the centennial of their celebration of the feast of St. Lucy. Concelebrating with me were the new pastor, Father Michael Della Penna, and Father Federico, who says the Italian Mass there.

It was a beautiful celebration, and, despite the threatening hurricane and storms, we had a full church.

They began by singing "Santa Lucia," which I had never heard sung in church before!

Of course, these are very important devotions in the Italian village, where so many of the families of the North End are from. Those traditions of popular religiosity, which Pope Francis speaks so much about, can be a very strong influence on people's lives and on their identity as Catholics. To me, it was very moving to see how the devotion to the saints has kept people connected to the Church and one another.

Visit at the cathedral

On Thursday, we were visited by Brother Connor and Brother Chris, who were in town and stopped by to see the cathedral.

It was very good to see them, and we were happy to give them a tour.