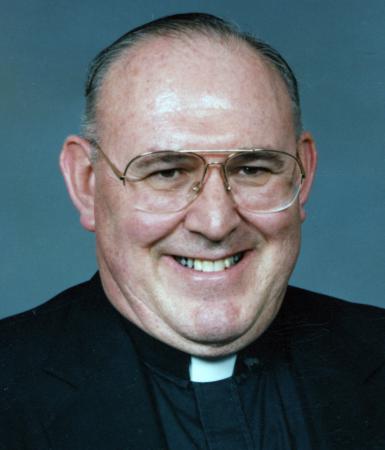 It seemed that wherever, whenever, or however you met Father Joe Fagan, he was smiling. All the more so, if he knew that you would be a willing audience for an amazing store of tales, about people, places, and parishes where he had served, and about his life as a priest and in his native South Boston.

Born in Boston on Dec. 3, 1941 -- just four days before the "date that would live in infamy" -- about which he conjured up parallels, he was a son of the late Robert and Dorothy (O'Brien) Fagan. He was raised in the "lower end" of Southie proudly a son of St. Augustine Parish. He attended the elementary parish school and graduated from Gate of Heaven High School in the neighboring parish of the same name.

He was an altar boy at the parish and would recall the many fine priests who served at St. Augustine: from the pastor, the famous Msgr. Harry O'Connor, to the various curates (as they were then called) -- John Cusack (later his first pastor in Danvers); Cy (Cyril) Tolland; and Gerry (Gerard) Barry, later pastor in Newton and Natick; to name a few.

He entered the archdiocesan seminaries, first at Cardinal O'Connell in Jamaica Plain and then over to Brighton for philosophy at St. Clement; he studied theology at St. John and Bishop Peterson.

Following his ordination, he was reunited with now Msgr. John Cusack, pastor of the recently, 1963, established parish of St. Richard of Chichester, Danvers. They got along famously. There was excitement in the parish that would be completing a new church and rectory and bringing the new parish to life with Masses, programs, bazaars, all those activities that marked off parish life.

In 1970, he went to the Missionary Society of St. James the Apostle and served for nearly three years in Bolivia.

In 1985, Bernard Cardinal Law granted him a sabbatical and Father Fagan took it at the Pontifical North American College at Rome.

This was to be his last assignment before he was granted senior priest/retirement status by Cardinal O'Malley in May 2008, when he moved to Regina Cleri Residence.

It was evident that Father Fagan loved parish life and people. So much so that during his tenure at Pope St. John, he readily assisted at parishes, trekking regularly to St. Ann, Peabody. By this time, he was limited in his mobility but still got around.

His role as spiritual director was really what made him widely known and greatly esteemed by brother priests. He was sought by many priests as a spiritual director, spiritual guide, or confessor, or some mix of the three. If Joe was a confessor at any priest gathering, his line was the longest.

He had faced health issues and even more limitations on his mobility over the years at Regina Cleri, but was nevertheless available. In fine weather, he was out front at Regina Cleri enjoying the day and would delight in being "disturbed" by any visitor -- his or another's.

Father Fagan's Funeral was to be celebrated Sept. 3 at Holy Ghost Church, Whitman. Burial was to follow in the parish's St. James Cemetery, Whitman.