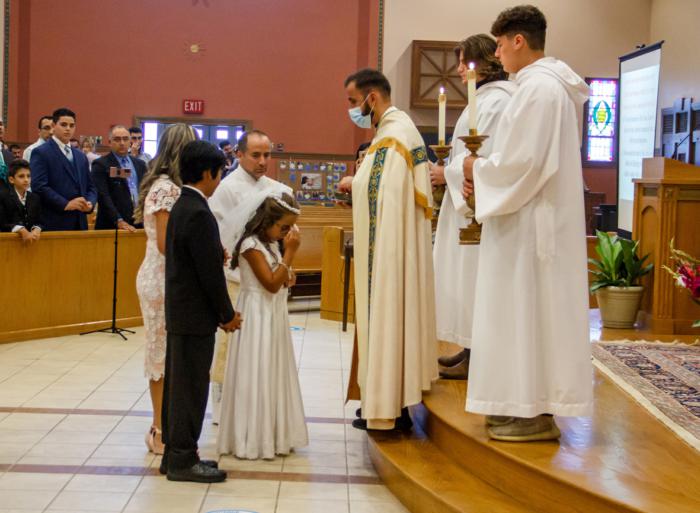 WAYLAND -- After holding many baptisms and a few weddings during its four-year history, the Immaculate Conception Chaldean Catholic Mission in the archdiocese marked a new milestone on Aug. 29 as they celebrated two young members' first reception of Holy Communion.

The Mass took place at St. Zepherin Church in Wayland, part of Good Shepherd Parish, where the Chaldean mission is based. The Chaldean Catholic Church is one of the Catholic Church's 23 Eastern Rites, meaning it preserves its own cultural identity but is in full communion with the Vatican. It is descended from the Church of the East in Mesopotamia, which traces its roots back to St. Addai and St. Mari, disciples of St. Thomas the Apostle.

The first communicants were Katia Esa and Azel Ashkouri. Because the mission does not have a formal faith-formation program, the girls had their own Bible study for six months in preparation for the sacrament.

Father Hermiz Haddad of Chicago from the Chaldean Catholic Diocese of St. Thomas the Apostle celebrated the Mass. He was assisted by Azel's father, Deacon Sermed Ashkouri, who was ordained a permanent deacon in the archdiocese earlier this year. Azel and Katia each read one of the Mass readings, brought up the gifts for Communion, and passed the Sign of Peace to others in the church.

In his homily, Father Haddad addressed the first communicants and talked about the sacrament they were about to receive. He said he advises those receiving their first Communion not to treat it like a high school graduation, as though they will never come back. He also stressed the importance of prayer, which he called "spiritual food."

After the Mass, Katia's sister Emily Esa was baptized. Then, the community went to the parish hall to enjoy traditional Iraqi food.

Between 70 and 80 families are involved with the Immaculate Conception Chaldean Mission, which brings together Arab Catholics of different rites -- including Syriac, Coptic, and Armenian as well as Chaldean -- and some Orthodox Christians. The mission holds two Masses each month, celebrated in the Latin rite with a combination of Arabic, Aramaic and English. They also celebrate many events in the liturgical calendar together, such as the feast of the Cross in September.

The Masses are coordinated by Deacon Ashkouri, who said they are trying to arrange for a priest from the Chaldean Diocese to visit and celebrate Masses in the Chaldean Rite.

Deacon Ashkouri said that, for a long time, the local Chaldean Catholics raised the possibility of establishing a church of their own, "to present where they are from, so they can feel close to home. That's what this mission does, not only (make them) feel close to home but also close to God, in their own language."

The mission was established in 2017 by Bishop Francis Kalabat of the Chaldean Diocese of St. Thomas the Apostle.

"Now, my priority is to keep the mission going, and bring more people together," Deacon Ashkouri said.

He and his family live in Nashua, New Hampshire, a 50-minute drive from Wayland. He said most of the people in the mission come from the Framingham-Worcester area, though some drive from as far away as Springfield.

"We went through a lot of difficulties in the mission, up and down, but God always was there to support us through difficult times," Deacon Ashkouri said.

He came to the United States when he was 15 years old, after the Gulf War. He acknowledged that some others in the mission have survived wars, and some have had difficult lives.

"It's hard, sometimes, for some of them, living here or coming from there (the Mideast). That's why this mission's important to them as well," he said.

When the coronavirus pandemic started, they began a weekly prayer group via Zoom, featuring the rosary, a Gospel reading, a homily, and a reading about the life of a saint. Additionally, a Chaldean priest from Detroit offered monthly Bible studies via Zoom. The mission was unable to hold their usual Masses until this spring.

The mission is planning to hold a choir festival in December, which would bring together choirs from different churches that will sing in their respective languages. They have held this event in the past and hope to bring it back. Deacon Ashkouri said it will be a sign of cultural diversity, bringing people together to glorify the Word of God.

More information about Immaculate Conception Chaldean Mission can be found on their Facebook page, on the Chaldean Diocese of St. Thomas the Apostle website at chaldeanchurch.org/portfolio/wayland-massachusetts, or by emailing bostonschaldeanmission@gmail.com.