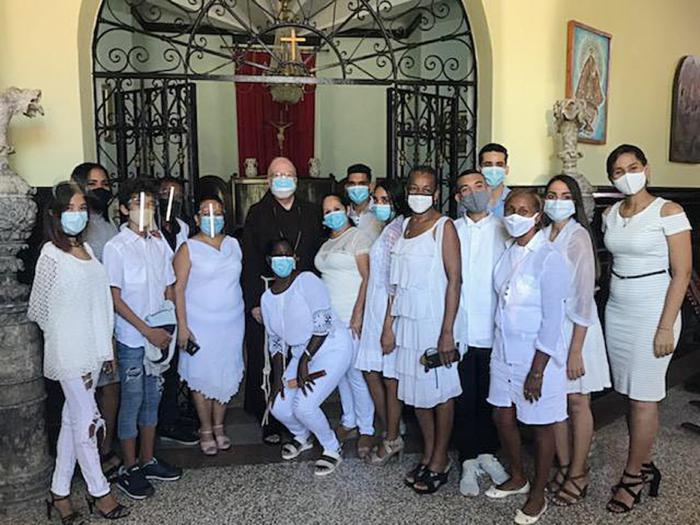 Cardinal O'Malley and the choir of the shrine of Our Lady of Charity of Cobre, Cuba. Pilot photo/CardinalSeansBlog.org

As some of you may have heard in the news, this week, I have been visiting the Dominican Republic, Haiti, and Cuba. Several months ago, I was invited to celebrate the Mass for the feast of Nuestra Senora de Caridad del Cobre (Our Lady of Charity of Cobre), which is the national patronal feast of Cuba at the shrine in Santiago de Cuba on Sept. 8. However, following the terrible earthquake in Haiti, we added a stop to that country. Knowing how our local Haitian community has been so greatly affected by this tragedy, I thought it would be an important opportunity for me to make this trip.

On Sunday, I traveled to Santo Domingo in the Dominican Republic with a group of doctors from the New York-based medical organization SOMOS, who were bringing medical supplies to Haiti, as well as to Cuba. With us was the president of SOMOS, Dr. Ramon Tallaj, and my good friend, Mario Paredes, who is the CEO of SOMOS.

When we arrived in Santo Domingo, we had Mass at the house of Archbishop Francisco Ozoria. Then, I visited retired Cardinal Nicolas de Jesus Lopez Rodriguez, whom I have known for over 40 years. He came to my ordination when I was ordained bishop in the Virgin Islands in 1984 -- when he was serving as Archbishop of Santo Domingo and Primate of the Americas.

On Monday, we left early in the morning for a cramped, four-hour helicopter ride to Port-au-Prince and then Les Cayes. There, we met with Cardinal Chibly Langlois, who was, of course, injured in the earthquake. His house collapsed, and three people living with them died. The cardinal's knee was injured, and he required surgery in Port-au-Prince. Now, he is back in Les Cayes and living in a house that the diocese has for retired priests. (The building is actually not yet finished, but at least it is standing.)

We also met with Bishop Pierre-Andre Dumas from the Diocese of Anse-a-Veau et Miragoane. With him was Father Louis Mersone, a Haitian-American who was raised in Boston at St. Angela's Parish and is a good friend of Father Bill Joy. He went to the Franciscan University of Steubenville and discerned that his vocation was to go back and be ordained a priest in Haiti. He is now the rector of the cathedral of Anse-a-Veau et Miragoane.

We toured the area and visited a number of the churches that were destroyed by the earthquake.

This earthquake was even more powerful than the earthquake a decade ago in Port-au-Prince, but it hit in a much more rural area. So, while the number of deaths was far fewer, the destruction was just incredible. Bishop Dumas told us that he lost 30 chapels and several parish churches. Of course, those churches are one of the few institutions people in those communities have.

Feast of Our Lady of Charity

Wednesday was the feast of Our Lady of Charity, the Patroness of Cuba, and I celebrated the 7 a.m. Mass at the shrine. I was accompanied by Archbishop of Santiago Dionisio Ibanez and Bishop Emilio Aranguren of Holguin.

Because of the pandemic, there is a curfew in Santiago from 1:00 in the afternoon until 7:00 the next morning. So, there are only about six hours of the day that people can really circulate within the city. So, I was very edified that so many people were able to come to my Mass, which was filled.

Later that morning, we went to visit the cathedral, which was also filled, and all the priests were telling me that their parishes had six, seven, or eight Masses for the feast of Our Lady of Charity, as well.

As I told the people in my homily, the first public Mass I celebrated was the Mass of Our Lady of Charity at St. Matthew's Cathedral for the Cuban community of Washington D.C. So, I said, it was very meaningful for me to be able to celebrate that Mass 51 years later in the shrine itself.