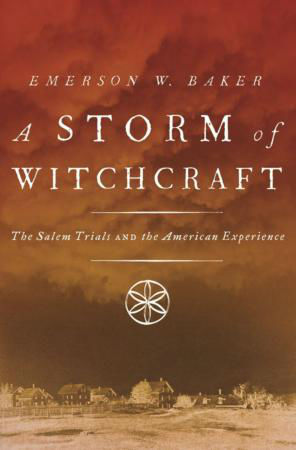 This is the cover of "A Storm of Witchcraft: The Salem Trials and the American Experience" by Emerson W. Baker. The book is reviewed by Nancy L. Roberts. (CNS)

Autumn's hard frosts and shortening days invite contemplation of our mortality. But for our 17th-century Puritan forebears, the veil between this world and the next fluttered in the slightest breeze. This was, after all, an age when people still believed in magic.

But it was a gale-force wind that tore through the colonial Massachusetts village of Salem, when an outbreak of witchcraft started there in January 1692.

Victims, mostly young women, told of being tormented by unseen demonic spirits that made them scream as if bitten or stuck with invisible pins and contort their bodies seemingly without cause. Some also attested to being haunted by specters.

The community soon began an extensive hunt to find those responsible for such horrors, and when the Salem witch trials ended, 19 villagers had been hanged, five had died in prison, and one, Giles Corey, had been pressed to death.

In this comprehensive account of the witch trials, Emerson W. Baker, a professor of history at Salem State College, demonstrates that Salem was "a perfect storm": It offered "a unique convergence of conditions and events that produced what was by far the largest and most lethal witchcraft episode in American history."

No, it was not ergot poisoning or an outbreak of encephalitis or Lyme disease, as some have suggested, that caused charges of witchcraft to echo first in Salem and then across the region. Rather, a complex web of factors, "including a new charter and government, a lethal frontier war, and a decline in religious fervor, would serve as kindling for a bonfire in 1692."

"A Storm of Witchcraft" explores what has come to be understood as a deadly example of mass hysteria or psychogenic illness.

Baker presents detailed portraits of the accused witches, the alleged victims, and the judges who prosecuted them in a well-paced narrative that is supported by exhaustive scholarly detective work. His insightful account is framed, appropriately, in the context of American and English history. Salem, Baker shows convincingly, was a "pivotal" event in American history; in its aftermath, "the efforts to exonerate those executed changed people's views of their government and helped bring an end to the Puritan theocracy."

One of the most intriguing parts of the book deals with the legacy of the witch tragedy. In 1992, on the tercentenary, Salem erected a memorial to the victims of the witch trials, continuing a long process of healing. The city has long been known as the "Witch City," and while simultaneously denouncing its history, it also capitalizes on it through numerous tourist attractions such as October's "Haunted Happenings."

Baker notes that this monthlong series of witch-themed events draws more than 400,000 visitors and injects about $9 million into the local economy.

Ultimately, he writes, the Salem witch trials, like all key events in history, demonstrate the series of choices that people make that have the power to change our lives forever. For instance, the Rev. Samuel Parris chose to attribute the odd behavior of his daughter and niece to witchcraft; Gov. William Phips chose a panel of judges to preside over the witch trials "who he knew accepted spectral evidence, even though his top advisers, Increase and Cotton Mather, were skeptical of its use."

Baker ends with a thought-provoking comparison of the Salem villagers' fear of witches with our contemporary fear of terrorists. Reading his book makes it much harder to view these Puritans with a sense of moral superiority, dismissing them as foolish and ignorant.

Salem, Baker argues, "has much in common with Wounded Knee, the site of a massacre of Lakotas; Pequot Hill, where more than 400 Pequots were murdered; or Gramercy Park and other places in New York City where numbers of African-Americans were lynched during the Draft Riots."

Of all the dark places in American history, Salem endures; perhaps, Baker writes, because its witch trials represent a fall from the very great height of John Winthrop's godlike "city on a hill" that Salem was intended to be.

Roberts directs the journalism program at the University at Albany and is the author of "Dorothy Day and the 'Catholic Worker.'"