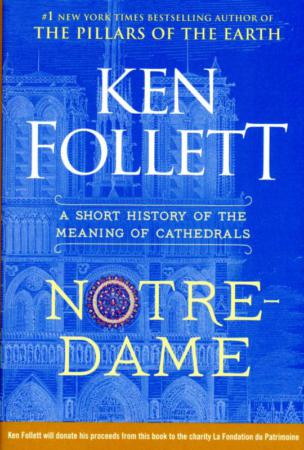 This is the cover of "Notre-Dame: A Short History of the Meaning of Cathedrals" by Ken Follett. The book is reviewed by Graham Yearley. (CNS)

Among the many disasters of 2019, the burning of the Notre Dame Cathedral in Paris evoked, possibly, the most universal sadness as this cathedral and the Eiffel Tower are the two most famous symbols of Paris. The cathedral fire which started April 15 destroyed the roof, brought down the spire and damaged many precious objects housed in by the cathedral.

The silver lining is that no human lives were lost; an alarm was sounded and the cathedral was cleared a half hour before flames were sighted. There has been no evidence found, as of yet, that the burning was the act of a terrorist.

Before the fire, a fund for the restoration of the cathedral had been started in 2018 and scaffolding had been put up and was there on the day of the fire. But officials worried that there wasn't enough in the fund to continue the project.

Very few think this restoration can be done in this time, including the best-selling author Ken Follett, who wrote a short book in the days following the fire. All proceeds from the book will be donated to the charity, La Fondation du Patrimoine.

In the life of a cathedral, five years is the bat of an eye. The Notre Dame we see today was a rebuilding itself, begun in 1160. The Gothic style had become popular and the old cathedral, built in Romanesque style, seemed dowdy and old-fashioned. The basic construction of Notre Dame was done by 1345, which is a speedy pace compared to many cathedrals. But since then, additions have been built, the spire erected and the building electrified.

The electrification may have been the cause of the fire -- a spark from a decaying electrical wire might have ignited the debris collected under the roof beams. As there were no sprinklers in the attic, the flames would have spread quickly. But it also might have been started by the quick toss of a cigarette butt.

But Follett's point is not to investigate what happened in the 2019 fire, but to explain why cathedrals get built and why we want to preserve them.

Kathy Borrus' book, "Notre Dame de Paris: A Celebration of the Cathedral," has a similar purpose and is part of a flood of new books published since the fire. It is a picture book filled with photographs and drawings of the cathedral and its contents.

There is an interesting section on the precious relics and treasures of Notre Dame and what happened to each object. For example the organ built in the 18th century was already in need of restoration, but the fire further damaged it. The altar built in 1725 and topped by a statue of Mary lamenting with Jesus lying dead across her lap did survive the fire but was blackened with soot and the statue was damaged.

Notre Dame has survived desecration during the French Revolution, German bombings during both World War I and II, and shifts of architectural and decorative tastes. It will rise again even if it takes longer than Macron predicts.

Subsequent to the publication of both books, the cathedral's rector told the media that the walls that remained after fire may still collapse. The scaffolding put up before the fire is exerting great pressure on the walls. If they do collapse, restoration would be made infinitely harder, if not impossible.

But these books are concerned with Notre Dame's past and present before the fire and this news does not alter their value as celebrations of a great cathedral.

Yearley has earned two advanced degrees from the Ecumenical Institute of St. Mary's Seminary and University in Baltimore and continues to study there.