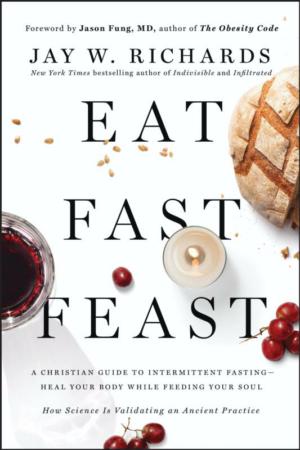 This is the cover of "Eat, Fast, Feast: Heal Your Body While Feeding Your Soul -- A Christian Guide to Fasting" by Jay W. Richards. The book is reviewed by Kurt Jensen. (CNS)

As recorded in the Gospels of Matthew and Luke, Satan's first temptation of Christ in the desert, after 40 days of fasting, involved carbohydrates.

"Forty days and 40 nights, and afterward he was hungry. The tempter came to him and said, 'If you are the Son of God, tell these stones to become bread,'" in Matthew 4:2-3.

Jay Richards, a research assistant business professor at The Catholic University of America, observes in "Eat, Fast, Feast," his encouragement of intermittent fasting (which is how most people do it, quite often for the health benefits) and water-only fasting (for the hardcore), that that one little bit of the desert episode holds more meaning than people think.

Had Satan brought up bread after just four days of the fast -- that first week is the worst, as this reviewer knows all too well -- that would have been a much stronger temptation.

After 40 days, though, Jesus, being mortal, was far into ketosis -- the term for the body burning fat at 3,500 calories per pound, instead of glucose (sugar) for energy. His fast, presumably sustained only with water, became the shield for the spiritual warfare that marked his subsequent ministry.

That's just one of Richards' many conclusions in this compact guide published to coincide with the beginning of Lent. He's hardly the first to point out that fasting, as a communal discipline, is virtually a vestigial practice, in part because of the old arguments about what constituted meat and whether olive oil could be classified the same as butter, and the spread of regional dispensations.

Forget those legalities, Richards writes. Just try. It's good for both your physical and spiritual health.

Fasting, a feature of all major faiths, is not mortification of the flesh. Daylong gorging and grazing are what punish the body instead. Fasting as part of a lifestyle gets the body working as it was intended to work.

"I'm convinced that one reason the church is so weak is that she has abandoned this ancient spiritual practice," he concludes. "It's hard not to notice that a decline in fasting has tracked closely with a decline in holiness and faithfulness to perennial Christian teaching."

But he just as quickly jumps away from that lectern to offer up several ways of easing into intermittent fasting and breaking the American addictions to starch and sugar. He also, after more than 100 pages, reminds the reader that he's not a doctor, he's not trying to convert anyone to veganism, and that fasting isn't for children, pregnant women or anyone with a metabolic disorder.

Richards outlines a six-week program that includes the old favorite 5/2 (not eating on Wednesdays and Fridays); the 4/3, in which only one meal is consumed for three days; and time-restricted eating (once every 18 hours is common). He also lists ways to exercise during a fast.

He also gets to something that fasters know well but is hard to describe to others: Once your body starts to use fat as its fuel supply -- breaking that sugar addiction takes about two weeks -- an incredible mental clarity kicks in. That's connected in part to renewed hormone production.

Richards also is frank about food cravings, mentioning that his involved corn chips, Cheez-Its and cheeseburgers. He neglects to mention that sometimes the cravings involve food that one hasn't consumed in years. I once had an entire dream involving a slab of Velveeta the size of a diesel locomotive.

"Eat, Fast, Feast" reads like an encouraging companion. Richards already knows how miserable you'll feel when you begin an intermittent fast. Solitude is usually not the best way to go at it, and neither is complaining. This book is intended to organize your plan.