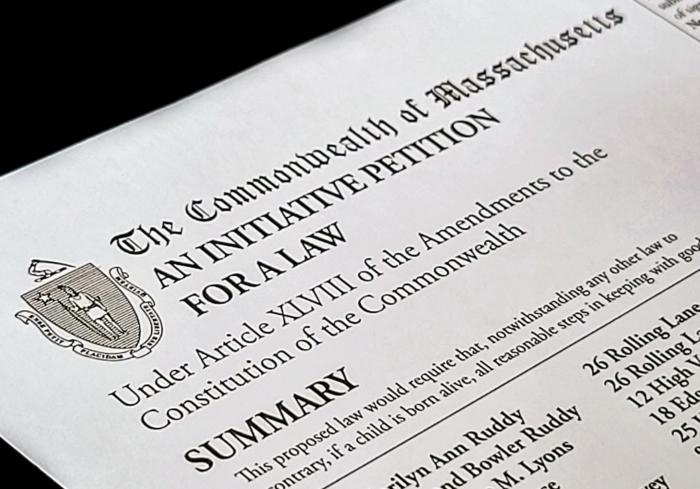 A detail image of the form being used to gather signatures for an initiative petition that would require doctors to save the life of a child born alive during abortion procedures. Pilot photo/Gregory L. Tracy

BRAINTREE -- Despite a setback that took away a week from an already narrow window of opportunity, a signature campaign is now underway for an initiative petition for a law protecting infants born alive during abortion procedures.

They were motivated by the passage of a state budget amendment containing several aspects of the controversial ROE Act, an Act to Remove Obstacles and Expand Abortion Access, at the end of 2020. The amendment significantly deregulated abortion in Massachusetts. Among other things, it removed language that ensured the protection of babies born alive during late-term abortions.

In a Sept. 9 meeting of American University Women for Life at the Knights of Columbus Hall in Norwood, Harvey explained that the law on the books for many years had included mandatory language, saying that a physician "shall" provide medical care if a baby survives an abortion. That has now been amended to say that the physician will be "enabled" to provide medical care.

"What chance does a baby have if, seconds earlier, it was intended to be killed?" Harvey said.

With this conviction, the Massachusetts Newborn Protection Coalition is following the process to propose a new law giving legal protection to infants born alive.

The language of the proposed law does not explicitly mention abortion. Harvey explained that they want to avoid mentioning that issue because it "gets people all stirred up."

Instead, it reads: "This proposed law would require that, notwithstanding any other law to the contrary, if a child is born alive, all reasonable steps in keeping with good medical practice shall be taken to preserve the life of a child born alive."

In early August, the coalition filed the petition to the office of Attorney General Maura Healey, whose role was to review it and judge whether its language was in compliance with the state constitution. Abortion-supporting organizations, including Planned Parenthood, the ACLU, and NARAL, urged the attorney general not to certify it.

"To me that means this is important. They realize this is an important issue," Harvey said.

On Sept. 1, the attorney general sent the petition back, refusing to certify it because it was "ambiguous" and had no enforcement provision.

The following week, the coalition filed suit asking the Supreme Judicial Court to issue an injunction allowing them to collect the signatures. The court did so on Sept. 9.

In addition to obtaining printed signature sheets from the Secretary of State's Office, the coalition is also sharing PDF files via email so people can print their own sheets to gather signatures. Harvey said there was some disagreement about whether to do this, since a single mistake or blot on a sheet can invalidate all the signatures on it. Ultimately, they decided to distribute the form to as many people as possible.

After being delayed by the attorney general's initial refusal, the signature gathering began on Sept. 15 and will continue until Nov. 17. In this step of the process, at least 80,239 certified signatures must be collected, equaling at least 3 percent of the total votes cast for the office of governor in the last election, with no more than a quarter from one county. It is recommended that more be collected in case some are illegible or cannot be verified.

However, if the legislature were to take no action, additional signatures would need to be collected, totaling at least one-half of 1 percent of the votes cast for governor in the last state election -- 13,374 certified signatures, with no more than 3,344 from one county. The proposed law would then be submitted to voters for their approval in the 2022 elections. To pass the law, at least 30 percent of the participating voters would have to vote in the affirmative on the question, and a majority of the ballots cast on that question must also be affirmative.

The Massachusetts Catholic Conference sent a communication to pastors on Sept. 17 to remind them of the policy regarding signature drive campaigns on church property and make them aware of Cardinal Seán P. O'Malley's support of the petition effort.

Although pastors have discretion as to whether or not to allow signature gathering, the letter said Cardinal O'Malley "strongly encourages" pastors to allow it, "as it is a pro-life petition seeking to protect babies born alive and is clearly in accordance with the teachings of the Church."