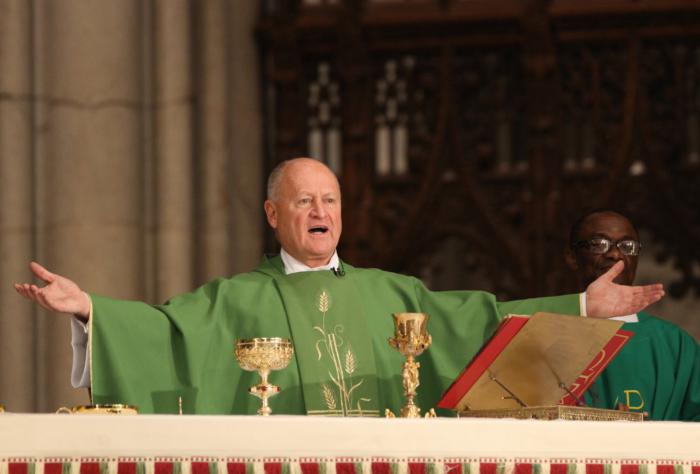 ...Msgr. Robert T. Ritchie, rector at St. Patrick's Cathedral in New York, presides at a Mass Nov. 10, 2013, for veterans and active-duty military personnel at the cathedral on the eve of Veterans Day. (CNS photo/Gregory A. Shemitz)

NEW YORK (CNS) -- Msgr. Robert T. Richie, rector of St. Patrick's Cathedral in New York City, told cathedral parishioners in an Aug. 3 letter he has been named in a civil lawsuit alleging he "sexually abused a child on one occasion" nearly 50 years ago.

"I completely and without reservation deny this allegation," he wrote. "Nothing like this has ever occurred during my 50 years as a priest, or at any other time in my life. I am confident that once this matter is litigated in court, the allegation will be found to be absolutely false."

The suit was filed under New York state's Child Victims Act, which went into effect in 2020. Gov. Andrew Cuomo recently signed into law a bill to extended the deadline for filing suits under the law to Aug. 14. The law lifted the statute of limitations on abuse cases to allow victims to file claims regardless of when or how long ago the alleged abuse occurred.

The deadline had been extended once before, to Jan. 14, 2021, but due to the COVID-19 public health emergency, the special filing period provided by the law was extended once more.

Msgr. Ritchie, who was named rector of St. Patrick's Cathedral's in 2006, noted in his letter to parishioners that "on May 29, we had a joyous celebration of my 50 years as a priest."

"My family, friends and parishioners -- actual and virtual -- all joined me to commemorate five decades of strong faith-filled humble ministry to God and God's holy people."

But a week ago, he wrote, "a terrible sadness came into my life," referring to the claim made against him in a suit filed under the Child Victims Act.

"I am now called to carry a particular heavy cross, so I need your prayers in a special way," he said. "Please pray for me, and pray for all victims of sexual abuse. Every day you are all in my prayers."

In a reply to a query from Catholic News Service Aug. 4 seeking a comment, New York archdiocesan spokesman Joseph Zwilling said: "The Archdiocese of New York takes all allegations of abuse seriously, and responds with compassion and respect. However, we are unable to comment on specific lawsuits brought under the Child Victims Act."