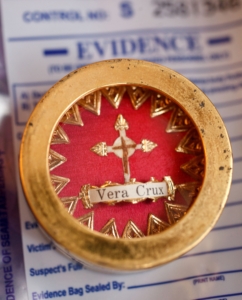 The relic of the True Cross Christ that had been stolen from the chapel of the Cathedral of the Holy Cross in July is pictured at the cathedral rectory Aug. 18. Vermont State Police recovered the relic Aug. 9 from 34-year-old Earl Frost who later fled. He was arrested Aug. 17 in New Hampshire on an unrelated warrant. Pilot photo/ Gregory L. Tracy

BRAINTREE -- One of the Archdiocese of Boston's most cherished relics that had been missing from its mother church for over a month has been returned to the archdiocese.

The relic of the True Cross, which had been housed in a reliquary in the Blessed Sacrament Chapel at the Cathedral of the Holy Cross in Boston's South End, was turned into the Vermont State Police. Officials from the cathedral retrieved the relic on Aug. 15.

The relic, a splinter of wood believed to be from the cross on which Jesus was crucified, was to be placed in its original reliquary at a prayer service Aug. 18 at 7:30 p.m. at the cathedral.

"I think we're thankful it's been returned," said cathedral pastoral associate Bob Travers. "We want to get it back to where it was originally so people can venerate the cross and pause and reflect in prayer."

According to an incident report released by the Vermont State Police, the relic was recovered on Aug. 9 after they received a call about a domestic argument that ensued in a Royalton, Vt. trailer park over the relic involving Earl Frost, 34. Frost, a transient, who turned the relic over to Vermont State Police. Frost claimed he received it from another person in Rhode Island.

According to the incident report, Frost said he had wanted to give the relic directly to the cathedral instead of to law enforcement.

Because Vermont State Police did not have confirmation of the relic's authenticity at the time they received it from Frost, they did not have enough evidence to hold him for possession of stolen property. Once cathedral officials confirmed the relic's authenticity, the Vermont State Police determined they had enough evidence to arrest Frost.

On Aug. 17, Vermont State Police learned that Frost was filling a prescription at a Hanover, N.H. pharmacy. Frost was subsequently arrested by the Hanover Police Department. Vermont police later learned there was an unrelated warrant for his arrest in New Hampshire.

As of press time, Frost was being held on the New Hampshire warrant, but a warrant is still being sought in Vermont.

"We are grateful for the great work of the Boston Police Department in their search for the relic," a statement by Terrence Donilon, spokesman for the archdiocese, said.

"Their professional and diligent work made this effort successful. We also extend our appreciation to the Vermont State Police who assisted in the recovery effort," Donilon added.

When cathedral officials arrived at police barracks, they were asked to confirm the relic's authenticity and place a dollar value on the artifact for legal purposes. While cathedral officials estimated the relic's worth to be between $2,300 and $3,800, they also said the its value is "priceless" given the fact that the papal ring that stamped the wax seal on the rear of the relic's encasement was destroyed after the pope's death. That seal and the red cord that attaches to it, Travers said, verifies the authenticity of the relic.

The Relic of the True Cross was believed to have been taken from the cathedral on June 30, according to the Vermont State Police's incident report. It was discovered missing from its reliquary at the base of a crucifix in the cathedral's Blessed Sacrament Chapel by a staff member on the morning of July 1.

There were also no signs of forced entry, so it was believed the relic was removed during the day when the cathedral was open.

Since then, the cathedral had hosted prayer services every Wednesday with the intention of recovering the relic, Travers said.

With the relic having been recovered, the previously scheduled Aug. 18 prayer service was to be dedicated to thank God for the safe return of the relic, Travers said.

The cathedral's relic was brought from France in the 1800's, a gift from the cathedral's first pastor, Father Abbe de la Poterie.

Father de la Poterie was a French priest who celebrated the first public Mass in Boston on Nov. 2, 1788, a time when Catholics were a minority in the city, according to Father Jonathan Gaspar, co-director of the archdiocese's Office of Worship and Spiritual Life and priest in residence at the cathedral.

Donilon, in the archdiocese's statement on the recovery, also expressed the local Church's willingness to forgive the perpetrators.

"Our prayers have been answered as the Relic of the True Cross has been recovered," the statement said in part.

"God has blessed us with His love and capacity to forgive. We prayerfully carry on His call for forgiveness for those responsible," the statement also said.