Banners welcoming the new archbishop of Boston poked out from the crowds gathered outside the Cathedral of the Holy Cross, July 30. Across the sidewalk, protestors held 15 foot makeshift crosses bearing the names of priests accused of molesting children. People watched from apartment windows across the street and construction workers on extended coffee breaks stood behind the metal barricades surrounding the cathedral.

All had come to catch a glimpse of Archbishop Seán O’Malley on the day of his installation. Some to welcome him; others taking the opportunity to voice their hurt and pain over the clergy sexual abuse scandal.

Among those was Kathy Dwyer, a victim-survivor who grew up in Braintree.

"Show me, don't tell me," was her advice for the new archbishop.

"Nothing Archbishop O'Malley will say will heal my pain," said Robert Nash, who alleges that Father Robert Barrett abused him in 1973. "What can he say."

Responding to the chants and comments by protestors outside of the cathedral, Father Tom DiLorenzo, administrator of Holy Rosary Parish in Winthrop, and host of the radio show In Season and Out of Season, stopped in front of the church to pray several decades of the rosary aloud. Ticket-holders waiting in line to enter the cathedral joined him.

"I've cried with victims, one right after the other," he said after the first decade. "But today is a new day... Jesus Christ is the Lord... He knows how to bring good out of evil."

Leslie Walkenstein, one of Father DiLorenzo’s parishioners, came to the cathedral “to support our new archbishop and the Church,” she said. “Only Jesus Christ can turn things around, but Archbishop O’Malley has faith in Jesus Christ and because of that we have reason to hope.”

Claire Croghan of St. Brigid Parish in South Boston, stood among the protestors holding a sign with the Irish blessing, ‘Céad Míle Fáilte’ (A 100,000 welcomes). She chose to stand with them because she “understands victim’s feelings,” because she too was “very disenchanted” with the Church because of the scandal.

"This is a fresh start for the archdiocese," she explained. "I wish Archbishop O'Malley well and I think he is going to be able to do a good job here."

Father John Maria Sweeney, FPO (Franciscans of Primitive Observance), a priest in the Diocese of Fall River, could not agree more. Father Sweeney, who has known Archbishop O’Malley for many years, recalled that he had told the archbishop “you’re going to Boston” soon after Cardinal Bernard Law, Boston’s former archbishop, resigned.

“He’s the best bishop in the country,” said the bearded, Franciscan-clad Father Sweeney. “It was a great move by the pope.”

"It's a great day for the Church. We all have great hope and high expectations for the new archbishop," commented Dzengeleski. "It's a very happy day for us all."

A sense of excitement also filled the lower chapel of the cathedral where priests were vesting for the installation Mass. Father Mike MacInnis, OFM, parochial vicar at St. Ann Parish in Marlborough, stated that he was “absolutely ecstatic” about concelebrating at the Mass. Listening to the newly appointed archbishop’s words during a July 1 press conference, Father MacInnis was confident that Archbishop O’Malley would be “wonderful” for the Catholic Church in Boston.

"His words not only bring hope for the archdiocese, but also for priests by bringing a real spirit of support," he said.

"I'm very proud of the archbishop and happy for the people of Boston," stated Father Lippert. "I think that he will be able to bring together the talents of the priests and the people of the archdiocese to move forward the process of healing."

Upstairs, thousands waited expectantly for the Mass to begin. Among the invited guests was Julia Russell, a victim-survivor and parishioner of St. Mary Parish in Mansfield.

Russell, who has lived in the diocese of Fall River for many years, said that she “cried with joy” when Archbishop O’Malley was named the new head of the archdiocese of Boston. “It was like a prayer had been answered.”

Mayor Thomas Menino, still recovering from cancer surgery, was among several local politicians who attended the installation. Before entering the cathedral to chants “Shame on you, Menino” he took a few moments to speak with the media.

"Today is a new beginning for the archdiocese. Archbishop Sean O'Malley is a sign of change... He is the guy that I see will be able to heal wounds... that chapter of the archdiocese is closed. We start a new chapter today," Boston's mayor said.

As the call came for the ceremonies to begin, cardinals, bishops, priests, deacons, altar servers, Knights and Ladies of Malta and of the Holy Sepulcher and members of the Knights of Columbus flowed from the vesting areas and processed to the entrance of the cathedral. A sense of joy and hopefulness shone on many of their faces as they to took the literal and figurative first steps on the path to a renewal of the archdiocese.

"It's a great occasion for the archdiocese and for our new archbishop," commented State Deputy of the Knights of Columbus Tom Ledbetter. "It is a wonderful new beginning."

"It's an honor and a privilege to be here on this exciting day. He brings great hope," said Philip Moran from the Knights of Malta. "He is very Christ-like and I hope that everyone will follow his ways.

Members of the Neocatechumenal Way from Our Lady of Assumption Parish in East Boston expressed their happiness, excitement and hope in the new archbishop with guitars, tambourines, and bongo drums. Singing and clapping, they were amongst the first to welcome Archbishop O’Malley during the procession.

"We came to support the new archbishop and to welcome him and show him that the Neocatechumenal Way supports him," said Raine Martinez.

NT Izuchi from the Nigerian Catholic Community at St. John-St Hugh Parish in Dorchester watched the installation simulcast, at Cathedral High School with approximately 40 others. 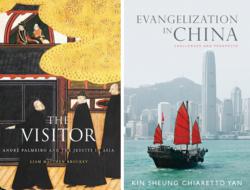