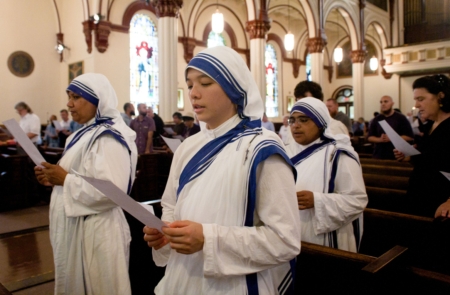 Sisters of the Missionaries of Charity join in the opening hymn of the Sept. 4 Mass to mark the anniversary of the death of their foundress, Blessed Mother Teresa. Pilot photo/ Jim Lockwood

DORCHESTER -- As they have done each year since her death in 1997, local Catholics gathered this week for a Mass to honor the legacy of Blessed Mother Teresa of Calcutta.

Though this year would mark the 100th anniversary of Blessed Mother Teresa's birth, Sister Mary Ajay, superior of the Dorchester community of Missionaries of Charity, the order that Mother Teresa founded in India in 1950, said that the Mass is held to celebrate her "birth into heaven."

The Mass was held on Sept. 4 at Blessed Mother Teresa of Calcutta Parish in Dorchester. Cardinal Seán P. O'Malley served as the main celebrant and homilist.

Following the Mass, the congregation gathered in the parish hall downstairs to watch "Mother Teresa," a documentary film by Ann and Jeanette Petrie.

In his homily, Cardinal O'Malley shared his recollections of meeting Mother Teresa while he was a young Capuchin priest, and his two times meeting her while bishop in the Dioceses of Fall River and the Virgin Islands.

He recalled one instance in New Bedford where she passed out business cards to people she passed on the street.

Cardinal O'Malley continued his homily by comparing Mother Teresa to Sts. Martha and Mary at Bethany, the subjects of the Gospel reading that day.

"Mother Teresa embodies the spirit of Bethany -- listen to Jesus and trust him," Cardinal O'Malley said.

He also discussed the lessons she can teach contemporary Catholics about discipleship, and encouraged the congregation gathered there to "honor her by imitating her life of goodness, discipleship and service."

Sister Ajay praised her order's foundress for her humility.

"She's a contemporary who shows us the importance of living a holy life -- a life dedicated to the poor and a life filled with hope and promise," Father Ahern said.

Former state representative Jim Brett is a parishioner at Blessed Mother Teresa Parish and was in attendance at the Mass. Brett met Mother Teresa in 1995 and still wears the miraculous medal she gave him during that visit.

"It's those little expressions that make you think twice -- a very powerful statement," he said. "She exuded it. She lived the life of the words she preached."

The Sept. 4 Mass marked the second time the parish hosted a Mass in honor of their patroness this year. In June, the parish displayed Blessed Mother Teresa's relics; the order of nuns she founded, the Missionaries of Charity, were bringing the relics on tour in dioceses throughout the northeastern United States and Canada.

Relics included her well-worn sandals, rosary, and crucifix, as well as a lock of hair and a vial of her blood.