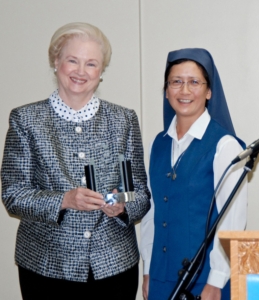 BOSTON -- While "afternoon tea" evokes the memory of times past, the Daughters of St. Paul recently hosted a traditional high tea as the venue for two innovative and exciting initiatives.

On Sept. 12, 140 attendees celebrated the presentation of the first annual Cordero Award to Mary Ann Glendon, Harvard Law professor, President of the Pontifical Academy for Social Sciences, and former U.S. Ambassador to the Vatican. They also helped to establish a new education fund to provide for the ongoing development of the Pauline sisters. The Daughters of St. Paul devote their lives to spreading the Gospel through all forms of media.

The cardinal's letter expressed not only gratitude for Glendon's extraordinary service, but also hope that the new education fund will enable more sisters to become equipped to evangelize society in the digital age.

Recalling the example of Mother Paula Cordero, Father Michael Harrington, associate director for Vocations for the Arhdiocese of Boston, offered an invocation. "She blazed a trail," he prayed, "where the path lay unmarked before her."

After a feast of traditional tea sandwiches and desserts served in the sisters' dining room on antique china settings, Provincial Superior Sister Margaret Timothy Sato, FSP, shared the Pauline vision of the path that lies ahead.

Observing the challenge of staying up to date in a constantly changing media culture, Sister Timothy also stated that the Daughters of St. Paul "need the ability to reflect on new media to guide others in its use."

At the close of her remarks, Sister Timothy presented the inaugural Cordero Award. Named for Mother Paula Cordero, the first Daughter of St. Paul to come to the United States, the award will be given annually to a Catholic individual or organization who has "striven to uplift the human spirit and to recognize the dignity of the human person in or through the media."

Glendon spoke on new challenges for the lay vocation that are a consequence of living in a media culture.

Reviewing what the Second Vatican Council called the "special task" of the laity, Glendon acknowledged the necessity of taking "the new media into our toolbox." "But along with the benefits," she observed, "have come some formidable challenges...While it's great to have so much information at our fingertips, the fact is that we're bombarded with more information than anyone can possibly process. Information is not the same as knowledge."

According to Glendon, it is these new opportunities and challenges that have motivated Pope Benedict XVI to actively encourage Catholic communications workers to "use the media to engage with society at an ever wider level."

Yet Glendon was quick to remind attendees that Catholics should strive to use the media in a distinctively Catholic way. As Pope Benedict has stated, Catholics are to approach new media "with a believing heart so that they may contribute to giving a soul to the Internet's endless flow of communication."

Glendon observed that, "Prayer and meditation require periods of quiet and internal calm -- which are harder and harder to come by in our busy lives and our media-saturated environments."

Thanking the sisters, Professor Glendon cited their "witness and good cheer" as "sources of enormous hope and inspiration."

The tea concluded with an exciting announcement regarding the new Pauline Education Fund. An anonymous benefactor has promised to generously match donations raised through the end of this year up to an amount of $100,000.