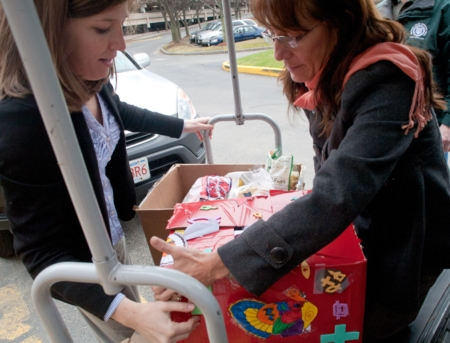 Volunteer Laura Edelman accepts a Thanksgiving food donation from Angela Smith, a parishioner at St. Irene Parish in Carlisle, at a food drive for Catholic Charities-Merrimack Valley at UMass-Lowell Nov. 22. Despite such donations, Catholic Charities president Debbie Rambo says, "Sadly, there have been requests for aid from Thanksgiving that we just can't meet." Pilot photo/ Jim Lockwood

BRAINTREE -- Heads of both the Society of St. Vincent de Paul and Catholic Charities are reporting their organizations are witnessing an even greater demand for food assistance than last year. They say the increased number of requests across the archdiocese is a result of a still staggering economy.

"There are a lot of people out of work or underemployed," said Ed Resnick, executive director of the archdiocese's St. Vincent de Paul Society. "The economy is the underlying cause of the need for people to ask from food pantries."

Debbie Rambo, executive director of Catholic Charities, said her organization expects to feed a combined 5,000 families from Thanksgiving food drives across the region, up about 500 from last year.

"Sadly, there have been requests for aid from Thanksgiving that we just can't meet," Rambo said. "There are more requests than resources available, which is a difficult decision to be in."

Resnick noted similar trends, saying that the St. Vincent de Paul Society food pantries, based in parishes across the archdiocese, expect to be able to fill 7,500 requests for meals over the Thanksgiving and Christmas seasons, roughly the same number as last year. However, like Catholic Charities, this year has seen additional requests the organization is unable to answer.

"We're seeing a tremendous uptick in the number of people applying for food from the food pantries," he said.

Resnick said various food pantries across the archdiocese have heightened requests for food assistance over the last six months, but there was a spike in October. He said the organization has also seen increased requests for heating assistance as winter is approaching.

The heads of both organizations also report that much of their client base includes people who are facing unemployment or underemployment, and who do not have adequate funds to meet all their bills.

"They've done their best to pay all their bills -- their rent, their mortgage, and utility bills -- but they find themselves at the end of the month just a bit short," Rambo added.

Resnick said that people in such financial situations have to decide where to allocate their money every month.