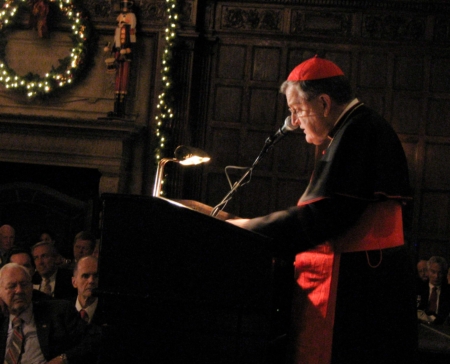 BOSTON -- "The name 'Catholic' accepts no qualifiers," Cardinal Raymond Burke said in his first public address since elevated to join the College of Cardinals on Nov. 20.

His comment was met with resounding applause from supporters of Thomas More College in Merrimack, N.H. at their annual President's Council Dinner. The event was held at the Harvard Club in Boston on Dec. 4.

Cardinal Burke has served as prefect of the Vatican's supreme court, the Apostolic Signatura, since 2008 and was archbishop of the Archdiocese of St. Louis before that.

Known for speaking with conviction about moral issues, most often the protection of the dignity of human life, Cardinal Burke has announced publicly that he would deny Communion to Catholic politicians who take positions contrary to Church teaching. He has also stated that Catholics can never vote for a candidate who advocates an absolute right to abortion.

To a culture full of ambiguity and moral relativism, Burke speaks decisively about right and wrong.

He told those gathered at the Thomas More College dinner to be wary of Catholic organizations that brand their names with adjectives and modifying phrases. He lamented the practice of many colleges qualifying their identity, calling themselves things like "Catholic university in the Franciscan or Jesuit tradition." This 'tradition' has little to do with the great tradition of the universal Church, he said.

The name Catholic has its full authentication, he added.

Secularism in the United States has created a "culture of violence and death" that denies the dignity of human life, integrity of marriage and right order of relationships between people. Now more than ever, the Church needs Catholic institutions of higher learning to form their students in the faith properly, he said.

"At the Catholic university, the very manner of study and research should manifest the bankruptcy of the abuse of human life and human sexuality which has come to be standard on many university campuses," he said. "How tragic that the very secularism which a Catholic university should be helping its students to battle and overcome has entered into several Catholic universities, leading to the grievous compromise of their high mission."

One of the first things every Catholic college must address is the "prevalent and utterly destructive error of our time that somehow faith is contradicted by reason," he said.

Students must be equipped to address the truth in their personal lives and society so that they will be able to resist the "secularist dictatorship" that seeks to exclude all religious discourse from the professions and from public life, he said.

In a time marked by religious illiteracy, when many young Catholics are poorly catechized, Catholic schools must teach scripture and tradition. Students must study the fathers of the Church and approved theologians -- above all St. Thomas Aquinas.

"There is really no place for engaging in speculative theology and certainly no time to waste on superficial and tendentious theological writing of the time. What sense does it make, for example, to engage students in the discussion of the possibility of the addition of women to Holy Orders when the students have little or no knowledge of the consistent teaching of the scriptures and tradition on the holy priesthood and on the reservation of priestly ordination to men?" he said.

Cardinal Burke stressed that the primary instructor at every Catholic university must be Jesus Christ. Christ who is alive in his Church must be taught, encountered in the liturgy and followed by leading a life of virtue. Otherwise, the school is not worthy of the name Catholic, he said.

"The presence of Our Lord Jesus Christ on the campus of the college and university is not something additional to or even extraneous to the pursuit of truth. It is rather he alone who can inspire, guide and discipline the professors and students so that they remain faithful in the pursuit and do not fall prey to the temptation which Satan cleverly offers to corrupt us every time we set out to obtain a great good," he said.

Burke said Catholic colleges "nurture the soul of our nation" and praised the great work of Thomas More College in particular. The school imparts a truly Catholic education to which "students and professors grow in their love of Christ."

Dr. William Fahey, president of Thomas More College, spoke with pride about the institution. The college was ranked 7th in the category "most Catholic institutions" out of the nation's 235 Catholic universities by the journal First Things. It is number one in New England.

Fahey added that it is one of 20 Catholic undergraduate institutions in the United States that conform to all requirements of Canon Law, including maintaining a majority of Catholics on the board and requiring faculty to make a profession of faith and fidelity.