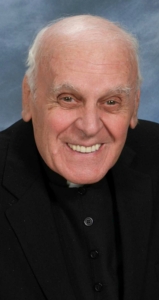 Father Thomas B. Morgan, since 1976 the pastor of Star of the Sea Parish in Salisbury, has been granted senior priest/retirement status.

A Salem native, he was born in the Witch City on July 28, 1929. He was one of the four children of the late Thomas and Mary Ellen (Sweeney) Morgan. He was the only son; two of his sisters are deceased: Ruth, who died this past July, and Mary Bareltta; his sister Dorothy Starble lives in Salem. He completed his seminary studies at St. John's, Brighton. Archbishop Richard Cushing ordained him to the priesthood at Holy Cross Cathedral on Feb. 2, 1955.

His first priestly assignment following ordination was as an assistant at Our Lady Help of Christians Parish in Concord, where he served for three years. In February 1958 he was named chaplain of Cambridge Hospitals and lived in residence at Sacred Heart Rectory in Cambridge.

It was on May 11, 1976 that he became the pastor of the seaside and vacation town of Salisbury. Humberto Cardinal Medeiros appointed him pastor of the parish. With Father Morgan's retirement, the last priest appointed a pastor by the late cardinal ends his service as pastor. Only Msgr. Stanislaus Sypek, the pastor of St. Adalbert (Polish) Parish in Boston's Hyde Park section, has been serving as a pastor longer than Father Morgan. Msgr. Sypek was appointed pastor of that parish by Richard Cardinal Cushing on May 21, 1969.

For almost 34 years, Father Morgan has guided the parish which has the year round church and the "beach chapel"; the beach chapel is actually larger than the parish church and accommodates the numbers of vacationers who come to the area during the summer months.

A refined gentleman, impeccably dressed in priestly attire, Father Morgan has both a great memory and a great sense of humor, laughing as easily at himself as at a well told tale or joke.

With 34 years of service to the parish he is a fixture in the parish and the town. There are families and individuals who have never known another priest beside Father Morgan.

With such a lengthy tenure, it will naturally be difficult for both pastor and parish to leave one another. However, Father Morgan leaves a legacy and impact that will remain as a solid basis for the incoming pastoral leadership.