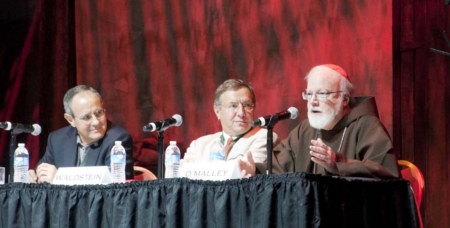 I was so pleased to learn of the joyous news that Pope John Paul II will be beatified on May 1. It's particularly poignant that the Holy Father chose Divine Mercy Sunday as the day for his predecessor's beatification. I am intending to go to Rome for the beatification. There is talk that 2 million people will come, very much like the huge crowds assembled for his funeral. This outpouring of affection is simply indicative of the sense of connection that Catholics around the world Catholics felt with this pope who expended himself to travel to the farthest places on the globe to carry the message of the Gospel and invite us to a deeper relationship with the Lord and to the mission that Christ has given to us.

Also this week (1/18), we learned of the sad news of the passing of Sargent Shriver. I issued a statement this week that I want to share with you.

"Today we mourn the passing of one of America's most beloved and respected citizens, R. Sargent Shriver. A champion for millions of people around the world as the founder of the Peace Corps, Sargent inspired us with his dedication to his family and public service. He changed the world for the better. His commitment to preserving and protecting human life at every stage of existence, especially for the unborn, and working to lift people out of poverty, were exceptional gifts of love and humanity. He and his late wife Eunice showered us with their energy and devotion to faith and society and they shall remain ever in our thoughts and prayers. We extend our deepest condolences to his children, grandchildren, relatives and friends during their hour of sorrow. We pray for the repose of Sargent's soul and we ask that God grant him eternal rest in His loving Kingdom."

Sargent Shriver had a very inspiring record of public service -- from serving as the first director of the Peace Corps under President Kennedy, to spearheading President Lyndon Johnson's War on Poverty to the founding of his own Special Olympics. His great passion for service to the poor and those who needed a helping hand was born of a deep Catholic faith. ...We pray for the repose of his soul and for the consolation of his children.

On Wednesday (1/19), I attended a luncheon for the staff of our office of the Pontifical Mission Societies. Of course, we are all probably most familiar with the Society for the Propagation of the Faith but the societies also include the Holy Childhood Association, the Society of St. Peter Apostle and the Missionary Union of Priests and Religious. We are very grateful to Father Rodney Copp for his generous service there, as well as Maureen Heil and all the other staff members, who are dedicated to the mission ad gentes.

I want to conclude this week by mentioning that we are holding a Vocations Discernment Retreat for men ages 18-40 at the Connor Retreat Center in Dover from Feb. 11-13. There is another, slightly shorter, retreat that same weekend at Blessed John XXIII Seminary, as well.

Each year, we have this retreat as an opportunity for men to discern their vocation in an atmosphere of prayer. It is an opportunity to hear from our own seminarians about the experience of seminary life and to reflect on the vocation to priesthood and the mission of the priesthood in the world today. If you are interested in participating, or know someone whom we should invite, please contact Father Dan Hennessey in our Vocations Office at 617- 746-5949.