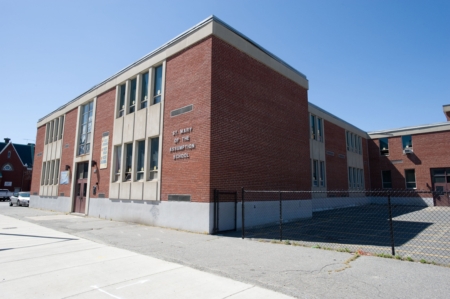 Father Jorge Reyes, OSA, pastor of St. Mary of the Assumption Parish in Lawrence announced April 12 that his parish's school would not be reopening in the fall. Pilot file photo/Bob Morin

BRAINTREE -- Despite a strong enrollment, a Catholic school in Lawrence is closing due to continuing operating deficits.

"The parish was not able to continue to support the school," said Father Jorge Reyes, OSA, pastor of St. Mary of the Assumption Parish in Lawrence. "It's been a very tough decision to make because we've had a healthy enrollment."

Effective at the end of this current school year, St. Mary of the Assumption School in Lawrence will close.

Teachers and staff were informed of the decision April 11 and Father Reyes informed parents via a letter April 12.

Father Reyes said the kindergarten through grade 8 school is closing because of significant operating deficits which the school has faced over the past few years. Presently, the school is running a $300,000 debt, and more deficits are anticipated as operating costs continue to rise.

"It has also become painfully clear over the past several months that the parish no longer has the fiscal resources to fund the school at the level required," Father Reyes wrote. "I have made every effort and reviewed every possible opportunity to overcome our financial burdens but have concluded that we have no alternative but to close."

Speaking with The Pilot, Father Reyes said the school erased last year's deficit through a loan from the Archdiocese of Boston.

According to Father Reyes, the school did not receive support from the Catholic Schools Foundation this year. He also said he did not anticipate the school would receive CSF funding for the 2011-12 school year.

Mike Reardon, executive director of the Catholic Schools Foundation, said that St. Mary's had submitted a grant request for the next school year and said final decisions are made in May.

He expressed the foundation's desire to support Catholic education in Lawrence.

"The Catholic Schools Foundation is committed to Catholic education in the city of Lawrence and we need to ensure the dollars entrusted to us by our donors have the most long term impact they can have so the students in Lawrence can be assured the benefits of Catholic education would be available for years to come," Reardon said.

Current enrollment at St. Mary's is 270 students in a school that has a capacity of 300. Last year, the school welcomed 94 new students, ending up with 234 pupils.

In September 2010, Lawrence Catholic Academy (LCA) opened from the merger of St. Patrick School in Lawrence and Our Lady of Good Counsel School in bordering Methuen.

When local Catholic school officials were planning LCA, there were discussions with St. Mary's officials inviting the school to join. However, St. Mary's opted to remain open as an independent parish school.

"We could not afford to join the academy," Father Reyes said.

Father Reyes said it would have cost his parish $80,000 per year plus half of the proceeds from the rental or sale of the existing school building.

Father Reyes said he opted for closure, as well, because he could not wait until May to receive a definitive answer from the Catholic Schools Foundation as to whether St. Mary's would receive funding.

Contacted April 12, St. Mary's Principal Vina Troianello said, "It is truly heartbreaking that a school with 270 students, a minority rate of 90 percent, 80 percent being Hispanic, is forced to close because of finances."

"I would hope that the legacy of St. Mary's would continue with these children and their children to follow," she added.

St. Mary's was started in 1859 by the Sisters of Notre Dame from Cincinnati, Ohio. At that time Lawrence had a substantial Irish immigrant population.

"The focus has always been the poor, the immigrant and the marginalized child," Troianello said.

The school will be hosting an open house April 26 at 6 p.m. so its students can explore other options to further their Catholic education. Representatives from area Catholic schools, including Lawrence Catholic Academy will be available at the meeting.

Father Paul O'Brien, pastor of St. Patrick Parish in Lawrence, said the academy would like to enroll St. Mary's students.

"We have really wide open arms and are ready to get down to work processing applications for students from St. Mary's," Father O'Brien said.

"We have to move very fast now and we have to take this one step at a time," he also said. "We are going to efficiently as possible interview all the candidates from St. Mary's who would like to apply for Lawrence Catholic Academy."

What is soon to be the former St. Mary's school building would be used for the parish's religious education program, Father Reyes said. He also said there could be other uses for the building, though parish officials have not made definitive plans.