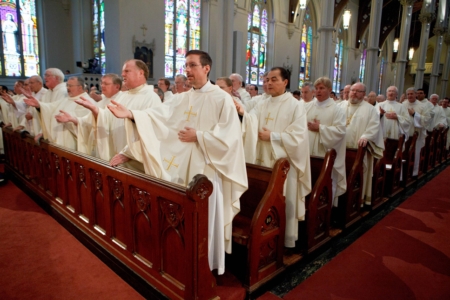 Priests extend their hands during the Consecration at the Chrism Mass. Pilot photo/Gregory L. Tracy

SOUTH END -- Keeping with Holy Week tradition, the priests of the Archdiocese of Boston gathered on Tuesday of Holy Week to celebrate their priestly fraternity at this year's Chrism Mass.

"It's just prayerful," said Father Eugene Sullivan, pastor of St. Francis Xavier Parish in Weymouth. "It's collegial. It's good to be with the Lord and one another."

"It makes a nice beginning to the Triduum," Father Sullivan added.

Nearly all of Boston's priests and seminarians joined Cardinal Seán P. O'Malley and the archdiocese's auxiliary bishops for the annual Chrism Mass, held this year April 19 at the Cathedral of the Holy Cross. Greek Orthodox Metropolitan Methodios of Boston attended the Mass.

Each year during Holy Week, Catholic dioceses throughout the world hold Chrism Masses where the bishop blesses the sacred oils used to administer sacraments. Oils include the Oil of Catechumens, Oil of the Infirm and the Sacred Chrism.

Following the Mass, the oils are distributed and will be used throughout the year in Baptisms, Confirmations and the Anointing of the Sick. During the Mass, the bishop leads the priests in renewing their commitment to priestly service.

The tradition of the Chrism Mass dates back to the early Church and was later made part of the evening Holy Thursday Mass. As part of his 1955 liturgical reforms, Pope Pius XII called for a separate Chrism Mass, apart from Holy Thursday evening Mass. Though many dioceses celebrate their Chrism Masses during the day on Holy Thursday, in Boston it is celebrated earlier in Holy Week so more priests are able to attend.

Archdiocese of Boston Director of Pastoral Care of Priests Father Jim Flavin said the Chrism Mass is a time when all priests can gather.

"It's one of the few times per year all the Boston priests are together for the Eucharist," Father Flavin said.

Cardinal O'Malley directed his homily toward priests, imparting advice for their ministry. He said priests should be humble, act with courage and be immersed in the Word of God through prayer and reflection.

Archer said a spiritual advisor gave him the same advice when he was discerning his vocation to the priesthood.

"He (Cardinal O'Malley) hit it right on the mark, which was fantastic," Archer said.

"That's what I carry inside of me," Archer added. "That's something that hasn't been able to flourish when I was in corporate America."

"I think that's the strongest way we're going to be preaching to the community -- showing an outward sign we are humble," Storey said.

The Mass was followed by a luncheon at adjacent Cathedral High School to continue the day of fraternity.

At the luncheon, the priests honored two of their own -- Fathers Jim McCune and Jack Ahern, who have a combined 84 years of priestly ministry.

Father McCune is the archdiocese's chaplain for senior priests. He has been a priest for 53 years, and served as a master of ceremonies for Cardinal Humberto Medeiros, the archbishop of Boston from 1970 to 1983.

Father McCune also served as a pastor of St. John the Evangelist Parish in Canton and vicar forane of the Norwood vicariate.

"Jim is known to us for the many gifts he brings to his priestly ministry, marked by years of wisdom born of experience, always with health and good cheer," said Father Tom Foley, the archdiocese's Secretary for Parish Life and Leadership, who introduced Father McCune as an honoree.

After Father McCune accepted the award from the cardinal, Father Foley read prepared remarks on behalf of Father McCune, who was suffering from laryngitis.

"On the basis of that record, I would submit there is no better presbyterate anywhere," Father McCune said in his remarks. "We have had our bruises to be sure, but we have survived and we have grown."

Father Jack Ahern was also honored by his fellow priests.

He was ordained in 1980 and became a pastor in 1994 at St. Mary of the Assumption Parish in Brookline. He served as a vicar forane and is now the pastor of three Dorchester parishes -- Blessed Mother Teresa of Calcutta, St. Peter and Holy Family.

He was also named a Right Reverend and an Archimandrite by the Melkite Catholics.

"Jack is a jovial priest. He's a visionary. He's hard-working," said Father Flavin in introducing Father Ahern. "He's a model of what the priesthood is about."

"We're a great cast of characters," he said. "Every day we make a difference in the lives of thousands of people."