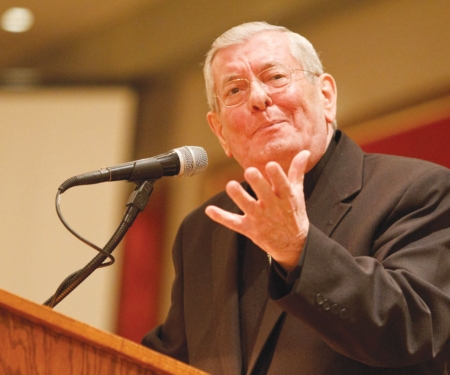 RANDOLPH -- For Archbishop Pietro Sambi, the apostolic nuncio to the United States, the value of Redemptoris Mater seminaries for today's Church can be likened to a source of life-giving water.

Recalling remarks he made in his first homily after becoming a bishop, Archbishop Sambi said the Church in each place can be seen as a small lake.

Unless that lake is fed by a flow of water, both in and out, it begins to shrink and stagnate. Through their charism which is both diocesan and missionary, the Redemptoris Mater Seminaries can be like that flow of water for a diocese, he said.

"It's at the center of diocesan values and missionary values," Archbishop Sambi told The Pilot.

"A diocese open to the universality of the Church is a diocese that will acquire vitality and progress in the future," he added.

Archbishop Sambi, along with local businessman and philanthropist Jack Shaughnessy, was the guest of honor at the Redemptoris Mater Archdiocesan Missionary Seminary's Second Annual Gala Dinner May 15 at the Lantana in Randolph, an event attended by about 350 people.

"Only the joy of having encountered the risen Christ can enlighten and convert contemporary men and women, who having left the shelter of religiosity, are carried away by the way of big cities," Father Medeiros said.

The presentation portion of the evening continued with a video recalling the life of Blessed Pope John Paul II who established the first Redemptoris Mater in Rome and his call to begin a New Evangelization. The video also recognized the contributions to today's Church of the Neocatechumenal Way, a way of Christian initiation that began in Spain in 1964.

Taking the podium, the nuncio commended the cardinal and those present at the dinner for their support of the seminary.

"I would like to express to you my gratitude and the gratitude of the Holy Father for the support, for the friendship, for the encouragement that you give to the Redemptoris Mater Seminary," he said.

"I went there this morning. I said 'Your house is small but the hope in this house is great,'" Archbishop Sambi said.

Speaking to the audience he said, "Help, please, to enlarge the house and, by doing this, the hope."

There are currently 18 seminarians being formed at the seminary, which is located in the former rectory of St. Lawrence Church in Brookline.

Speaking on Good Shepherd Sunday, which is also the World Day of Prayer for Vocations in the Church, Archbishop Sambi reminded dinner attendees of prayer's importance in fostering priestly vocations.

"Prayer is the first way that is given to us to contribute to the increase in number and quality of vocations," the nuncio said.

The nuncio recalled the words of Pope Benedict XVI during his 2008 apostolic visit to the United States, when the pope said that the capacity of a local Church to foster vocations is a sign of its vitality.

"May Boston recover that position that it had in the Church in the United States, to be the mother, to be the light, to be the Church indicating the future through its engagement to have many vocations," he said.

"Don't be afraid, there are never enough priests," he added.

During the evening, Father Medeiros honored Shaughnessy with the seminary's Evangelization Award for his longstanding support of the archdiocese, its Catholic schools and seminaries.

"The future well-being of the Catholic Church is dependent on thriving seminaries," Shaughnessy said in his acceptance remarks.

Shaughnessy deflected attention he received at the dinner from the award.

"It is not to honor me, but to support, promote and advance the works of our archdiocesan seminaries, particularly Redemptoris Mater."

Boston's Redemptoris Mater Seminary was erected by Cardinal O'Malley is 2006. The men ordained from the seminary are ordained for the Archdiocese of Boston; however, they are also willing to serve the Church anywhere in the country or the world that they are needed and that the archbishop chooses to send them.

Seminarian Przemek Kasprzak welcomed the presence of the papal nuncio at the gala.

"It's really the providence of God he is here," said Kasprzak, who will be entering his second year of theology studies in the fall.

As part of their formation, seminarians typically spend a period of time doing mission work either in another U.S. diocese or abroad.

Felipe Gonzalez, who is set to begin his final year of theology in the fall, served as a missionary in India, Sri Lanka and Nepal.

"It makes you see how the Church is catholic," said Gonzalez. "You are prepared to go anywhere at any moment."

Vocations to the seminaries come from members of the Neocatechumenal Way.

"We are the fruits of these communities of lay people where little by little we discover we are called to this vocation," Gonzalez said.

The Neocatechumenal Way begins in a parish by the invitation of the pastor. A team of catechists presents a series of catechesis to parishioners that opens a small faith community where parishioners are formed in a deeper understanding of their baptismal roots.

Speaking with The Pilot after the event, Father Medeiros praised the success of this year's gala.

"I think the presence of so many people is a sign of the spirit we have seen here tonight," he said.