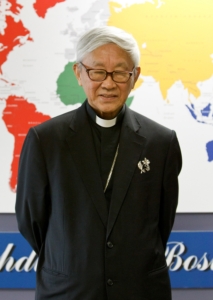 BRAINTREE -- Attendees of the weekday Mass at the Archdiocesan Pastoral Center received an unexpected homily on the situation of the Church in China, when the retired Archbishop of Hong Kong celebrated the liturgy there June 18.

Cardinal Joseph Zen, bishop emeritus of Hong Kong, was in Boston on part of a multi-city North American trip to visit local Chinese Catholic communities and to raise awareness about the dire situation for Catholics in China.

His Boston trip included visits with the Chinese Catholic community at St. James the Greater Parish in Boston and officials of the Pontifical Mission Societies of the Archdiocese of Boston, which includes the Society for the Propagation of the Faith.

In his homily at the pastoral center Mass Cardinal Zen said that in Hong Kong, which reverted to Chinese control in 1997 but largely retains British law and governance systems, the Church has relative freedom from control by the Chinese government. But he described the situation in mainland China as "very bad."

"But when we come here to hear the word of God, we always get encouragement. The victory is always on the side of the Lord," said Cardinal Zen.

"The situation of the Church in China is very bad because the atheistic government never changed their policy; they want to control the Church. They allowed the religion to function, but provided they follow always the order of the government."

Since the establishment of the communist government in China, all religious groups are only allowed to function under the control of the government.

As part of its suppression of the Catholic Church, the Communist government formed the Chinese Catholic Patriotic Association in the late 1950s and required Catholics to disavow allegiance to the pope and the Church of Rome.

Catholics who refused to break ties with Rome were forced to either worship clandestinely or face persecution, including imprisonment.

The Chinese Catholic Patriotic Association is frequently referred to as the "official" or "open" church and those who retain loyalty to Rome are known as the "underground Church."

Despite efforts by the Vatican in recent years to bring the patriotic association back into communion with Rome, one of the most contentious issues has remained the government's appointment of new bishops without the approval of the Holy See.

Within the last month in China, two bishops were ordained illegitimately in ceremonies sponsored by the Chinese Catholic Patriotic Association the latest being Father Joseph Huang Bingzhang on July 14. This now makes for three illegitimate ordinations of bishops in China in the last year.

Bishops appointed by the Vatican participated in the last two ceremonies, though some may have participated under duress. On July 18, the Vatican announced that Father Bingzhang was automatically excommunicated.

Speaking to The Pilot after the Mass, Cardinal Zen said he believes the continued appointment of bishops without Vatican approval stems from the Vatican's earlier misunderstanding of the mentality of the Chinese government.

In the past, he said, as a sign of reconciliation, several illicitly ordained bishops were recognized by the Vatican without requiring them to leave the patriotic association.

"The obvious purpose (of the recognition) was that they should work from within to change the system," the cardinal said.

However, he said, rather than building ties, the recognition was perceived by the Chinese government as a sign of weakness.

"The Communists do not understand kindnesses. The more you compromise, the more they demand," said Cardinal Zen.

The government, he said, came to feel that they could appoint bishops unilaterally with the expectation that the bishops will eventually be recognized by the Holy See.

He also said that the recognitions led to confusion among the faithful of the underground Church who, for many years, have resisted joining the patriotic association.

However, Cardinal Zen expressed confidence for the future of China-Vatican relations saying that Pope Benedict XVI and the new leadership in the Congregation for the Evangelization of Peoples have a clear sense of the situation of the Church in China.

"The situation seems to be desperate, but I hope for a new beginning because there is a clear direction from Rome now," he said.

He added that the future of the Church in China ultimately rests with the country's Catholics.

"Our hope is in the faithful," he said.

When asked what American Catholics can do to help the Church in China, Cardinal Zen responded that they can pray and become more educated on the situation.

Maureen Heil, director of programs and development for Pontifical Mission Societies of the Archdiocese of Boston, echoed the cardinal's instruction to pray for Catholics in mission areas.

She said she finds that people are often eager to help the missions by donating money or visiting, but she instructs them to pray first.

"We're a people of action, we want to get our hands dirty somehow. I think that we have forgotten the idea of the importance of basic prayer, of holding these people up to God," said Heil.

Father Rodney Copp, Archdiocesan Director of the Pontifical Mission Societies, said he found the Cardinal's visit significant in that it brought attention to the local Chinese Catholic community that gathers at St. James.

Heil said the community gathers weekly from all over the archdiocese and they work hard to support the Church in China through prayer and financial support.

A member of the St. James community, Grace Luk is a graphic designer for the Pontifical Mission Societies and also a native of Hong Kong. She heard Cardinal Zen speak at St. James and was instrumental in coordinating his visit to the Pastoral Center.

"It means a lot. He is from Hong Kong, so to me he is like one of my brothers," said Luk.

She said she feels lucky to have religious freedom in both Hong Kong and the United States and "that we can really pray, in whatever way that we want and we can really follow what Jesus is teaching us."