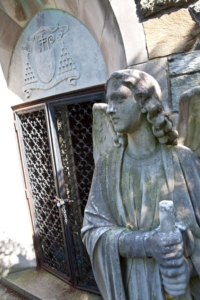 A statue of an angel appears to stand guard over the small chapel that contained the tomb of Cardinal William O'Connell. Cardinal O'Connell's remains were moved to a new location on the grounds of St. John's Seminary in Brighton. Pilot file photo/Gregory L. Tracy

BRIGHTON -- The remains of the late Cardinal William O'Connell, who was Archbishop of Boston from 1907 to 1944, have been moved from from a vault in a chapel on Boston College grounds in Brighton to a new burial location at St. John's Seminary also in Brighton.

The work to prepare the new burial ground and the move of the remains began July 21 and is still being conducted at the new site, according to Terrence Donilon, spokesperson for the Archdiocese of Boston. It is expected that a formal ceremony will be held later this year marking the permanent relocation of the late cardinal's remains.

The reinterment marks the end of a contentious process that started in 2004, when BC purchased from the archdiocese much of the grounds of the former chancery in Brighton including, the chapel that served as burial place for Cardinal O'Connell. The archdiocese used much of the proceeds of the sales to pay for settlements related to the sexual abuse of minors by clergy.

At the time of the sale in 2004, the archdiocese agreed with BC to relocate the cardinal's remains to a new location. In the agreement, BC retained $2million from the sale pending the completion of the removal of the remains from their grounds.

In September 2009 the archdiocese announced plans to move the remains to the campus of St. Sebastian's School in Needham, a Catholic high school the cardinal founded in 1941.

The move was opposed by the cardinal's heirs, who contended it violated the cardinal's wishes to be buried near St. John's. The heirs filed a petition in court later that year to block BC and the archdiocese from moving the remains.

In a statement to The Pilot released July 27, Donilon confirmed the move of the remains and explained that an agreement was reached with the cardinal's heirs.

"In accordance with an agreement reached with the late Cardinal's next of kin, and in keeping with the wishes expressed in his last will and testament, his remains have been reinterred on the grounds of St John's Seminary with prayers offered by Bishop Arthur Kennedy, Rector of St. John's Seminary."

"Additional work will be conducted on the new site and a new grave stone will be installed at the appropriate time," the statements said.

Cardinal O'Connell moved the archdiocese's headquarters from Boston to the Brighton campus. He had repeatedly stated his wishes to be buried on the Brighton site. He was buried in a concrete vault beneath the marble floor at the foot of the altar in the Chapel of the Blessed Virgin Mary, constructed in 1928.

In 2009, BC won city approval to develop the former archdiocesan chancery grounds where the chapel is located as the school's Brighton campus.

"Out of respect for the late cardinal, we do not think that it would be appropriate to have a gravesite on a college campus, especially on a site in close proximity to a proposed parking facility," BC spokesman Jack Dunn told the Pilot in 2009.