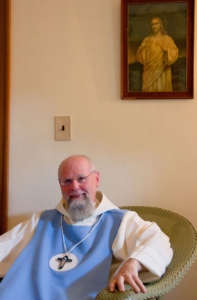 WEYMOUTH -- Peace is something everyone seeks but can sometimes be one of the hardest things to find.

Father Michael Sevigny -- a Capuchin Franciscan for over 40 years -- has founded a contemplative and active religious community here in the archdiocese, which aims to help members in their quest for inner peace and, in turn, to bring that peace to the world.

The Apostles of Peace, which will be open to both men and women, has received permission from Cardinal Seán P. O'Malley and recently established a base at the unused convent of Immaculate Conception Parish in Weymouth.

The group already has two female members, with several more scheduled to attend a discernment retreat later this month. Once the community of women is established, the order hopes to grow the men's community.

Eventually the community would like to build its own monastery with separate living quarters for the men and women and a chapel in the middle.

"Peace is our particular charism -- a unique spirit of the Apostles of Peace. We are to first encounter this gift within ourselves and then bring it into the world," states the group's literature.

Apostles of Peace members will invite people to eucharistic adoration and try to help them become reconciled to God and be at peace with themselves, their own history, their families, and the world. Then with this interior peace, they can "bring that gift into the world in which we live," said Father Sevigny.

"Sitting before the Lord Jesus in silence and listening. Listening to what is happening in the interior of your soul, being able to understand what is happening, to speak about it, realize what you need to do about it, reconcile yourself with God, to let go of all the 'unfreedoms' within," said Father Sevigny describing the process.

There will be talks during the Holy Hours and spiritual direction available afterward to help people process what they experienced in prayer.

The community also plans to hold retreats, seminars, parish missions, days of prayer recollection, along with rosary prayer groups and other ministries centered around the Eucharist.

According to Father Sevigny, the men and women will live separately, but have communal prayer and meals. They pray the liturgy of the hours and have both group and private Holy Hours.

Father Sevigny said he was inspired to start the order by the Virgin Mary.

In 2004, Father Sevigny had just finished leading a group of pilgrims in Medjugorje when he had a dream in which he saw Mary holding a blue scapular -- a long outer garment worn by religious. She said no words, but drew close to the priest and placed the scapular over his head.

"When I got up in the morning, I knew that something distinct had happened internally," he said.

Afterward, Ivankovic-Mijatovic gave Father Sevigny the message she said was from Mary, that the dream was significant and that he was to start a new religious institute in the United States focused on adoration and peace.

"Our Vow of Peace calls the religious to pray daily for peace in the world, in cities, in families and most of all in the heart of humanity," states a brochure from the group.

The Apostles of Peace is one of three emerging religious groups in the archdiocese seeking the designation of private association of the faithful, the first step to becoming a full-fledged religious order. The other two are the Daughters of Mary of Nazareth led by Sister Olga Yaqob and the Franciscan Tertiary Handmaids of the Immaculate, an offshoot from a women's Franciscan order.

The archdiocese will be looking at the new groups in this time of testing to see if they develop a pattern of sustained membership and growth.

On Sept. 16-18 the Apostles of Peace will be holding a discernment weekend for women. Out of eight spots available, seven are already filled.

After the weekend, those who want to know more will be invited to stay longer and experience daily life with the group.

"I think it's very appropriate now in that time that we live in -- this third millennium -- because there is no peace. Everywhere you look there's war. I think that our Lord and Our Lady are raising new communities in order to be able to bring this gift of peace in the world," said Father Sevigny said.