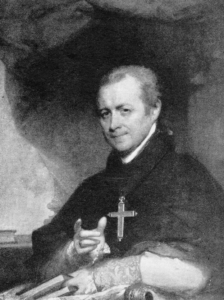 The centennial of the naming of William Henry O'Connell to the College of Cardinals on Nov. 11, 1911 provides The Pilot a chance to recall and celebrate that historic event. In the coming weeks brief biographies will appear in this series about Boston's cardinals, native sons, or seminary alumni who received the "Red Hat" in the course of their lives.

In the homily which he gave during his recent installation, Archbishop Charles Chaput of Philadelphia likened the relationship of a bishop and his diocese to a marriage and he spoke of the love which grows between the bishop and his people. Bishop John Cheverus, Boston's first bishop, knew of that love. His motto was taken from John 4:7 -- Diligamus nos invicem -- Let us love one another. We shall see in this brief sketch of his life how that love was expressed in many concrete ways.

On Jan. 28, 1768, Jean-Louis-Anne-Madelain Lefebvre de Cheverus first saw the light of day in the town of Mayenne, then located in the Diocese of Le Mans, France. One of the six children of Jean-Vincent-Marie Lefebvre de Cheverus and Anne Lemarchand des Noyers, young Jean's family made important contributions to the spiritual and civil life of Mayenne. His father was the magistrate of Mayenne, one uncle was the mayor of the town, and his other uncle was the parish priest of the principal parish of Mayenne. His father and his uncles provided Jean with fine examples of service to others.

Jean's early education took place at home. His mother sought to provide her children with the foundations of a good Christian life: devotion to God through a regular regimen of prayer, love of neighbor, and concern for the suffering and the poor. Growing up in a faith-filled family, it should not be surprising that Jean was considered the possibility of a vocation to the priesthood at an early age.

In addition to his education at home, Jean attended the local school where he excelled in his studies. After a lengthy preparation by his parents, Jean was deemed worthy to receive his first Communion at the age of eleven. He confided to his mother that he wished to be a priest. The following year he was tonsured in Mayenne's Church of Calvary by Bishop de Herce of Dol. Shortly after, Bishop de Gonssans of Le Mans visited Mayenne and examined the young cleric. He was so impressed by Jean's spiritual and intellectual qualities that he offered him a scholarship to the College of Louis-le-Grand at Paris.

In the autumn of 1781, Jean departed Mayenne for Paris where he would attend the College Louis-le-Grand. His years at the college were trying for him. Not only was he away from home for the first time, but the administrators of the college, wishing to have their students imbued with the new ideas which would shortly contribute to the French Revolution, modified the curriculum, abolishing the rule of silence and abandoning many pious religious practices, deeming them useless for forming men of the world. Jean did not allow himself to be affected by the new rules. He maintained his regimen of piety and prayer. He was esteemed by his fellow students for the goodness and purity of his life.

In 1786, Jean applied to and was accepted by the Seminaire St-Magloire in Paris, which was staffed by the Oratorian Fathers. During his time at St-Magloire, he also took courses at the Sorbonne. Jean's facility in languages became apparent as he learned Hebrew to read the Old Testament and Greek to read the Fathers of the Church, these in addition to Latin which was the language of his theological studies.

He was ordained a deacon in October 1790. His bishop, foreseeing the difficulties which were to afflict the Church and knowing how much good could be done by a priest such as Cheverus, requested and received from the Holy See a dispensation from the defect of age for the young deacon. The bishop sent him the document, expressing his wish that Cheverus be ordained a priest at the time for the next ordinations in Paris.

On Dec. 18, 1790, Jean Lefebvre de Cheverus was ordained a priest for the Diocese of Le Mans at Paris by Archbishop Antoine-Eleanore-Leon LeClerc de Juigne of Paris. This was the last public ordination which took place in Paris during the Revolution. He immediately left Paris for Mayenne where he celebrated his first Mass at midnight on Christmas, also celebrating the solemn Mass on Christmas day.

His uncle, the parish priest of Mayenne, was aged and infirm. The elder Father Lefebvre de Cheverus wrote to the bishop of Le Mans, requesting that his nephew be appointed parochial vicar of Mayenne to assist him in the administration of the parish. The bishop not only acceded to the request, he also named the recently ordained priest a canon of the cathedral of Le Mans.

The young Father Cheverus was zealous in carrying out his parochial duties in the face of increasing danger. He was asked to adhere to the Civil Constitution of the Clergy and declined the request with firmness. As a result, he was ordered to leave the parish house, to be replaced by a priest who had adhered to the Constitution. Even though he no longer lived in the parish house, he continued to minister to the parishioners of Mayenne. On Aug. 15, 1791, the municipal authorities again requested that he adhere to the Constitution. Upon his refusal, he was forbidden all priestly activity except for the celebration of Mass in the parish church. Father Cheverus continued his ministry in secret, a room in his father's house having been converted into a chapel.

In early January 1792, his venerable uncle died and Bishop de Gonssans appointed Father Cheverus to be parish priest of Mayenne and vicar general of the Diocese of Le Mans. Within a few days of receiving news of his new duties, the local authorities decided to pressure the young priest, but not openly. He was quietly advised that his father's house would be burned down if he did not leave it immediately. Not wishing to cause his family such distress, he left Mayenne and proceeded to Laval where all priests of the diocese who had not adhered to the Constitution were required to reside. He was subject to daily reporting to the civil authorities. In June 1792, Father Cheverus and all the other priests at Laval were interned in a convent and he believed that his life was in peril. Having experienced a minor health problem, he obtained permission to leave Laval to spend a few days with his parents. He advised his parents that he was preparing to flee France for England. Disguised as a layman and with the passport of a merchant, he left for Paris, arriving there on June 25th. He remained there, living discreetly for more than two months.

A new law, dated Aug. 26th, allowed all non-adhering priests to leave France with a special passport. Presenting himself to the authorities in Paris as the parish priest of Mayenne, he received the special passport. Then, with both passports, he departed Paris for Calais where he wished to embark for England. He arrived in Calais on Sept. 11, 1792. 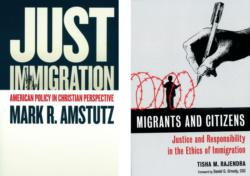