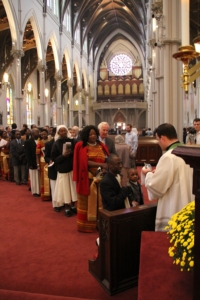 People in the Cathedral of the Holy Cross line up to venerate a relic of Blessed John Paul II held by Father Jonathan Gaspar after the World Mission Sunday Mass on Oct. 23. Pilot photo/Justin Bell

SOUTH END -- With intercessory prayers in Swahili, Chinese, and English, along with choirs of Cape Verdeans, Ugandans and Vietnamese -- the Mass on World Mission Sunday, Oct. 23, showed the Church's mission is indeed both global and local.

The Mass illustrated the diversity of cultures present in the Archdiocese of Boston, along with calling attention to the ongoing global missions of the Church. On the back cover of the program for the Mass, 25 missionaries were listed who had been killed in 2010, including 17 priests, a religious sister and a bishop.

Cardinal Seán P. O'Malley celebrated the annual Mass at the Cathedral of the Holy Cross organized by the Society for the Propagation of the Faith and gave an impassioned homily about learning to love neighbors and enemies and then sharing God's treasures.

Before getting to the main messages of his homily, Cardinal O'Malley welcomed concelebrating priest, Bishop William McNaughton, the retired bishop of Incheon, Korea. Born in Lawrence, Bishop McNaughton was ordained a priest for the missionary society Maryknoll in 1953.

The cardinal also welcomed family members of Bishop James A. Walsh who cofounded Maryknoll in 1911. Cardinal O'Malley said he would be using Bishop Walsh's chalice for the Mass.

In his homily, the cardinal emphasized that "God loves first. God doesn't wait for us to love him and then he loves us in return!" That love, to all around us, is "what discipleship is about."

He expounded on his theme of love with Christ's account of the Good Samaritan and the question of who one's neighbor is.

Returning to the message of World Mission Sunday, the cardinal recounted Christ's words at the end of the Gospel of Matthew -- known as the Great Commission -- to go out and make disciples of all nations, teaching all that Christ taught and to baptize in the name of the Father and of the Son and of the Holy Spirit.

The cardinal affirmed that if we love God and neighbor "then you're going to be anxious to carry out the Great Commission and share the treasure and the love that we have received."

He said that people are "always very generous" when a physical need is encountered and they respond with food, clothing and medicine but on Mission Sunday, "that's not enough."

"And if we love them we're going to want to do something about that -- by carrying the good news to our brothers and sisters. That's what Mission Sunday is about."

The cardinal also brought the theme of Mission Sunday closer to home recalling the 200th anniversary of the Archdiocese of Boston and the visit of the bishop of Bordeaux, France who brought with him copies of letters written by Bishop Benedict J. Fenwick, the second bishop of Boston. In the 1800s, Bishop Fenwick had appealed to the Bordeaux diocese and to Propagation of the Faith for the new Boston diocese.

"Well now it's our turn to help new churches all over the world. The Church is missionary. We're missionary at home and abroad," said Cardinal O'Malley.

As a way to continue the missionary work of the Church, the cardinal mentioned the Catholics Come Home initiative to "call back those who were once members of the Church in an active way and have drifted off."

He concluded his homily speaking of Blessed Pope John Paul II whose feast day had been celebrated the day before. The cardinal stressed the late Holy Father's popular message of "Be not afraid" and "Open wide the doors of your heart to Christ."

Cardinal O'Malley gave the final blessing of the Mass with a relic of Blessed John Paul II. After Mass, a long line of the faithful in diverse and colorful clothing venerated the relic.

At a reception following the Mass, The Pilot spoke to Bishop McNaughton, 84, who also referred to Christ's Great Commission.

"Every Catholic should be a missionary -- everyone, because it's basic to the nature of the Church," said Bishop McNaughton.

He said that some people are called to mission work overseas, but that every Catholic's prayers, sufferings, and other contributions can "help in a tremendous way."

"It's everywhere; the mission's everywhere so it could be domestic or foreign. Whatever they can get involved in is wonderful, but the big thing is to pray for the missions. Prayer is so powerful," he said.

Father Rodney Copp, director of the Pontifical Mission Societies in Boston, echoed the theme of prayer, evangelization by example, and financial support as a way people can help the missions.

He called the activities of the day a "celebration of the Church actually in miniature."

One of the attendees, Holly Benner, 47, said eucharistic adoration led her to become a lay missionary after her conversion to the faith. With her organization "Needs for Africa," she works on bringing clean water to people in Africa.

She recalled tapping water out of a newly created bore hole, or well and sharing it with a little boy.

"And I looked into his eyes and then I drank that same water with him, you could just see the love of God and the gratefulness.