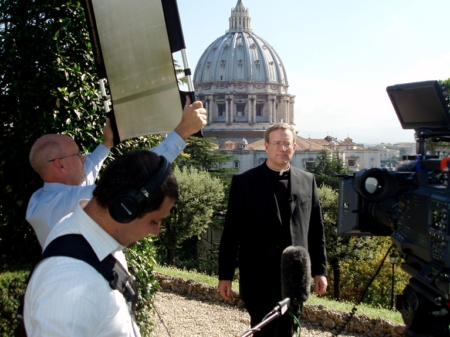 Father Robert Barron of Word on Fire Ministries films a segment of his series "Catholicism" on location in Rome. The CatholicTV Network began airing the series Wednesdays at 8:30 p.m. this month. Pilot photo/courtesy CatholicTV Network

WATERTOWN -- It took several months, but a documentary series detailing elements of the Catholic faith has finally reached Boston television audiences in February.

"Catholicism," a documentary series hosted by Father Robert Barron, premiered on the CatholicTV Network on Feb. 8. In 2011, producers made four episodes of the program available through the Public Broadcasting Service (PBS), but Boston affiliate WGBH opted not to air the program.

"We have had the opportunity to work with Father Barron and his producers in the past on his 'Word on Fire' series, and we were really looking forward to airing whatever we could of the 'Catholicism' series, because it really shows the richness, the beauty, and the roots of our Catholic faith," said Bonnie Rodgers, director of programming at CatholicTV in Watertown.

"Catholicism" will take viewers across the world to more than 50 locations in 16 countries, showing how the Church's influence on humanity has created a global culture.

"Our engaging guide, Father Barron clearly explains what Catholics believe and why -- and answers questions both Catholics and non-Catholics have about Jesus, God, Mary, the saints, the last things and much more," said Nancy Ross, a producer of the documentary.

The first episode to air on CatholicTV Network, "Happy are We: The Teachings Of Jesus" covered the revelation of Jesus as God.

In that episode, Father Barron highlighted the Beatitudes -- the path of mercy and lessons of forgiveness, care for the poor, and our relationship with God -- while on pilgrimages to Poland, Germany, Spain and New York City.

The episode premiered Wednesday Feb. 8 at 8:30 p.m. on the CatholicTV Network. Boston area viewers can catch re-broadcast episodes on Friday morning at 8 a.m., Sunday night at 10:30 p.m. and Monday at noon.

Successive episodes "A Body Both Suffering and Glorious: The Mystical Union of Christ and the Church," "Word Made Flesh, True Bread of Heaven: The Mystery of the Church, Sacrament, and Worship," "A Vast Company of Witnesses: The Communion of Saints," "The Fire of His Love: Prayer and the Life of the Spirit," and "World Without End -- The Last Things" will run on the same schedule as the first episode.

"The purpose of the 'Catholicism' series is not only to tell the Catholic story, but to show it -- in a way that's never been done before. We take viewers on a journey all around the world to illustrate the beauty and truth of the faith in stunning, high-definition cinematography," said Ross.