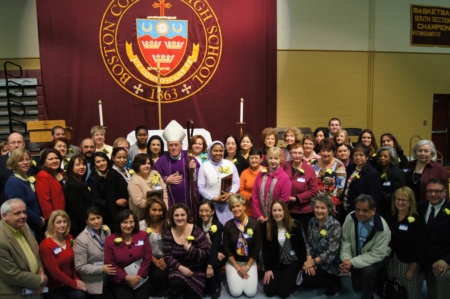 DORCHESTER -- Teachers of children and adults came from around the Archdiocese of Boston to pray, listen, and share ideas for teaching the Gospel at the Annual Archdiocesan Catechetical Congress at Boston College High School, March 24.

Organizers said roughly 1,000 people participated -- including more than 800 registered guests joined by priests, religious, and presenters -- as the archdiocese presented keynote speakers, workshops, and displays from religious, faith-based, and Catholic educational groups and individuals at the event.

"Catechesis comes from the Greek word which means to echo. What we are echoing is the good news, the Gospel message, the message of Jesus Christ," the director of the Office of Religious Education Susan Abbott said.

"Those who catechize echo; it is a systematic instruction in the faith," she said.

Organizers themed the catechetical congress "Do This in Memory of Me," in keeping with the theme set by the USCCB on Catechetical Sunday this past September.

The Saturday event began with a multi-lingual Mass celebrated in Spanish and English, followed by the presentation of the 2012 Catechist Recognition Award. Bishop Richard Malone of Portland, Maine celebrated Mass with Father J. Bryan Hehir, who gave the homily. The Archdiocesan Black Catholic Choir sang hymns in English and Spanish.

After Mass, the attendees split into two groups. A little more than half of the participants -- about 425 people -- attended the Spanish workshops as the day began.

Bishop Malone gave the English keynote address "Eucharist: Source and Summit of The New Evangelization" to the almost 400 English speaking participants who remained in the BC High gymnasium, McNeice Pavilion.

Ordained in 1972, the 11th bishop of Maine graduated from St. John's Prep in Danvers and St. John's Seminary in Boston. A former theology professor at the seminary and chaplain at Harvard University, Bishop Malone also brought catechetical expertise as a prior director of the religious education office in the Archdiocese of Boston.

He discussed the central role of the Eucharist in the life of Catholics historically and in efforts of evangelization.

He urged the crowd to not only think about the importance of the Eucharist, but to truly live out its promise in their actions regarding The New Evangelization.

"Transmitting Christ is of course the mission that brings you and me here this morning. It is the essence really of evangelizing catechesis, helping people to come to know the Lord Jesus in a personal way, not just a conceptual way," the bishop said.

"You people know the faith. We all have to know it better and better, don't we, every day? We are never completely there. That is the purpose of things like today for all of us. I know how much I need to know more about my faith. If you have confidence in your faith on some topic, speak out. The Eucharist will strengthen you for that," he said.

In an interview afterward the bishop expanded on this point for The Pilot.

"Pope John Paul II, who wrote a whole lot about catechesis, said that the most important form of catechesis is the ongoing religious education of Catholic adults. He did not mean let go of the children or the teens, but he said the most important group to be working with in terms of faith formation are the grown-ups. The reason why is a no-brainer. If we can get to the adults, especially parents, we have a lot better shot at getting to the children," he said.

After the keynote, the English group began workshops to learn not just more about the Catholic faith, but how to teach that faith.

Workshops addressed a variety of subjects including how to teach students who have autism, developing parish resources to promote RCIA, dispelling misconceptions about Church teachings, teaching teens the Gospel, using media as a tool for teaching, and other subjects related to the work of catechesis.

Organizers found it important to include workshops geared toward adults focusing on topics including the New Evangelization, the fight against physician assisted suicide, and parenting as a Catholic.

Abbott said she knew one particular speaker would draw a large crowd, even with the range of options provided.

He ran out of the 50 packets he printed for his presentation "The Mass is Boring?? No Way! We've Got to Talk!" in the opening minutes of the workshop.

"I just think it is very important that we realize that catechetical life is about getting our people to full, active participation in the sacramental life of the Church," Father O'Connell said.

Attendee Natacha Thomas, who teaches second-grade students, found the workshop "really helpful" and said she looked forward to returning to her parish and sharing her thoughts "on how we can increase attendance at Mass" among the youth.

The Daughters of Saint Paul had an exhibit in the common area of the high school to show the works of their ministry to guests and catechists.

Sister Christina Wegendt, FSP, and Sister Hosea Rupprecht, FSP, gave a workshop called "Faith Formation for a Media Generation" in a classroom at the school.

The sisters recommended that catechists see television shows and movies like "Glee" and "The Hunger Games" to provide an opportunity to connect with younger students.

Sister Christina stayed after the presentation to discuss the themes of some of the media addressed in the workshop, including the dystopian reality presented in the book and movie "The Hunger Games."

"There is a lot of literature out there about post-apocalyptic futures. They paint a really dark picture. I think it is really a good thing to talk about with kids. Why is that so appealing to us? Because, it appeals to people on a kind of primal level. There is some kind of fear that it is speaking to, and kids kind of know that. So, you can have really valuable discussions about that," she said.

She said adults should explore the story of a film or book and have a working knowledge of young people before presenting certain media to them.

"It requires nuance," she said.

The sisters ran through a group discussion of how to analyze media from a Catholic perspective after showing a clip from the show "Smallville." In the scene they showed, the main character Clark Kent -- who becomes Superman -- guided a young girl to choose forgiveness and life over vengeance and killing.

Sister Hosea said clips like this prompt students to ask "How do I live according to my values?"

The Spanish catechists shared their workshops while the English catechists heard their keynote in the gym, then the two switched with the Spanish keynote speaker Father Ricardo Gonzalez addressing the same theme in his keynote as Bishop Malone did.

Father Gonzalez delivered his keynote in the same gymnasium to the Spanish speakers. He pointed out the centrality of the Eucharist in Catholic teaching.

"It was an excellent analysis of the whole thing. Not only in the theological point, it was also an invitation to live as the Lord asks us to," Pilar Latorre said.

Latorre said bringing all of the Catholics together for a single catechetical congress contributed to the theme of the event because all the different communities celebrate one Eucharist.

"I think it is a wonderful thing to be together praising the Lord, and being together as a family," she said.

She wished the best for those who attended the conference in the hope that they could help grow participation over the coming years.

"I hope that these people go out full of new energy, faith, hope and also happiness. I think it is the only way that will bring growth for next year with more people," she said.

Susan Abbott stressed the continued need for a comprehensive presentation at the annual conference, which has continued for more than 60 years.

She said the catechetical congress attendance grew by about 30 percent this year, but that it was "the tip of the iceberg" in comparison to what could be accomplished moving forward. She said the larger venue at BC High was chosen because of that growth.