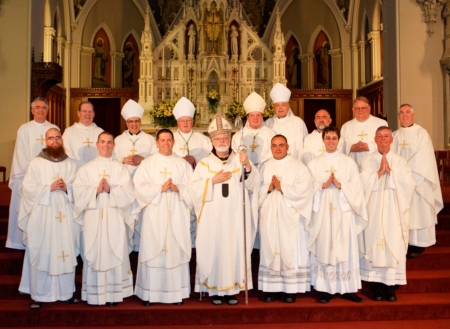 SOUTH BOSTON -- Cardinal Sean P. O'Malley ordained six men to the priesthood at the Cathedral of the Holy Cross on June 23.

In his homily, the cardinal thanked those close to the new priests for helping lay the foundation for priesthood in each of the men's lives.

"I want to express my congratulations and thanks to the families and friends of these men, who have helped them in their journey towards the priesthood, supporting them by their prayers and good works so that this day would at last come in their lives and the life of the Church," the cardinal said.

The cardinal contrasted celebrating ordination with the worldly challenges a bishop faces daily in difficult decisions, skirmishes with the press, dealing with financial disasters and other crises.

"But there are also great joys, like celebrating ordination, an ordination that allows Jesus' pastoral love to touch more and more lives," he said.

In a departure from recent tradition, rather than being seated in front of the altar, the cardinal conducted the ordination rite from the bishop's chair, called the cathedra, which symbolizes his apostolic teaching authority.

After the homily, each candidate approached the cathedra and promised obedience to the cardinal and his successors and laid prostrate during the litany of the saints. The cardinal laid his hands upon each of the men, ordaining them priests, followed by all of the bishops and priests.

The newly ordained then received the prayer of consecration, investiture with stole and chasuble and anointing of the hands.

"The Father anointed our Lord, Jesus Christ, through the power of the Holy Spirit. May Jesus preserve you to sanctify the Christian people and to offer sacrifice to God," the cardinal said, as he anointed the men with the Oil of Chrism.

"Receive the oblation of the holy people to be offered to God. Understand what you do, imitate what you celebrate and conform your life to the mystery of the Lord's cross," the cardinal told the new priests as he handed each a paten and chalice.

The six new priests joined the cardinal at the altar to concelebrate the Mass.

At the end of the Mass, all the new priests blessed the archbishop, and he kissed their hands.

He gave a final message on the significance of prayer and support for vocations by the laity before closing the Mass with a blessing.

"Vocations are everyone's business. We are a eucharistic people. We need to have priests, and the priests will come only as a result of our prayers and hard work," he said.

Father Adrian Milik commented on his feelings after the ordination.

"It is a great blessing for me to be able to reach this day. I am so glad to be ordained a priest. I am so thankful to God and to Cardinal Sean and to all of the people involved in the process of my formation, from my parents down to my seminary instructors," Father Milik said.

His family traveled from across the United States and the world to come to the ordination.

Father Milik's brother Edgar Milik, 32, took a flight from California to see his younger brother ordained to the priesthood. He said holding onto their faith as young people held a different context in Poland than in the United States.

"It is kind of hard to remember in America where freedom of religion is kind of taken for granted. In Poland, that was not really the case. It is still very much a political dissident action to attend church," Father Milik's brother said.

Mariusz Milik, 55, raised his sons in the United States, but currently lives in Poland. He expressed an array of emotions on behalf of his family.

"I am very proud. It is our greatest day," he said.

"We are giving our son to God, so this is a little difficult. We are very proud obviously," he said.

Father Michael Sheehan, a member of the Franciscans of the Primitive Observance, a religious community in the archdiocese, described the feeling of finally becoming a priest after completing his studies.

Father Sheehan's parents said their son felt the call to the priesthood from an early age.

"I am extremely proud of Michael and all his accomplishments. It all culminates today in his ordination. We are very pleased and excited for him," the new priest's father Gary Sheehan, 59, said.

His mother Diane Sheehan, 57, said she knew her son would find success in his pursuits.

"Michael has been a leader his whole life. We knew in second grade that he was going to do well whatever he did. God bless him. It has been a long time coming to this day," she said.

His grandmother, Anne P. Shannon, 83, said she knew her grandson had a calling since he was young.

"I was attending the quarter of seven Mass every morning. He was with me, so I always knew that Michael was special, and that he indeed had a calling -- and I was right," she said.

Father Eric Bennett returned to the United States for the ordination in Boston, after completing his studies at the Pontifical North American College in Rome. He said the sense of fraternity he felt as the bishops and priests welcomed him to the presbyterate nearly moved him to tears.

"I did not expect that, it is not something I planned. It was just very natural. It felt like everything was flowing from within, and that God was truly present," Father Bennett said.

"It just kind of was. I let it flow, and it was great just thinking of all the memories I have had of my journey here, thinking of my family, people who have prayed for me, and just even the little moments throughout life -- those little moments where I sensed God was calling me," he also said

"This is a great honor. It is like marrying God. It is more than a marriage to any other person. I cannot describe the feeling. It is just amazing," she said.