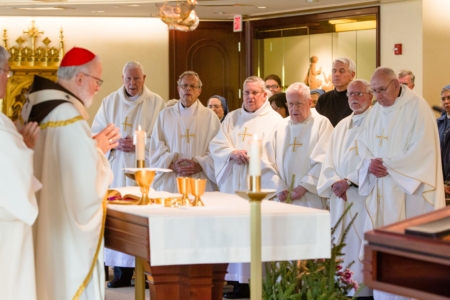 'Each year during Advent, we host a Mass and luncheon here at the Pastoral Center for our senior priests who reside at Regina Cleri, the archdiocese's residence for senior priests.' Pilot photo/CardinalSeansBlog.org

I have just returned from attending the Ecclesia in America international congress in Rome, which was held from Sunday to Wednesday. It marked the 15th anniversary of Blessed John Paul II's apostolic exhortation "Ecclesia in America." However, before I get to the details of the congress, I want to mention an event that took place last week.

Each year during Advent, we host a Mass and luncheon here at the Pastoral Center for our senior priests who reside at Regina Cleri, the archdiocese's residence for senior priests. It is always wonderful to be able to gather with these men who have given so much to the life of the Church over so many years. I also want to take this occasion to remind readers within the Archdiocese of Boston that our collection at Christmas Masses is one of our most important efforts in ensuring the care of our priests. Joe D'Arrigo, the executive director of our Clergy Funds, wrote a wonderful article on this topic for [last] week's Pilot. I urge you all to read it and to be generous in your support of them as they were generous in their ministry to the people of God.

After arriving in Rome on Sunday (12/9), I celebrated Mass at my church in Rome, Santa Maria della Vittoria. Joining us at the Mass, in addition to the seminarians and friars, was Dan Kelly who is the head of the Order of Malta in the United States. We met him on the plane, so we invited him to join us for the Mass and the lunch following. The conference itself was inspiring. About 200 bishops, priests, deacons, religious and lay people were invited to be a part of this congress, held to once again rekindle the efforts of Ecclesia in America to build a united Church out of all of North and South America. The Knights of Columbus were instrumental in sponsoring the congress, as well as the Pontifical Commission for Latin America. The congress centered around the theme of the new evangelization under the patronage of Our Lady of Guadalupe. It was a wonderful opportunity to be together with people from all over the hemisphere and to reflect on common problems and solutions; and to talk about the new evangelization in the context of immigration and the many other challenges of our hemisphere. We also spoke about sharing clergy and help that is being given by priests from Latin America.

...In my talk, I spoke about the different ways the churches can collaborate. I gave examples from my own ministry working with immigrants from Latin America and gave a bit of history of past collaborations. For example, I spoke of the Seminary of Montezuma in the Southwestern United Sates with the help of U.S. bishops to train Mexican seminarians during the time of the persecutions in that country and now there is a seminary in Mexico that is sending seminarians to work in the United States. I also talked about the challenges of trying to evangelize the culture, the need for the Church to find a voice in the public square, and the need to find articulate lay people to help in political life and the needs of communications.

...In the audience hall was a beautiful life-size creche brought by the Mexicans made out of beeswax. We ended at the Feast of Our Lady of Guadalupe with a Mass at Cardinal Marc Ouellet's titular church, Santa Maria in Traspontina, on the Via della Conciliazione.