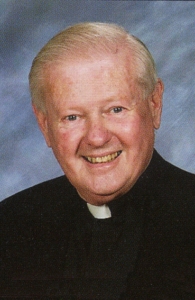 Father Carroll was born Nov. 8, 1940 in Lawrence, the son of the late James M. Carroll Sr. and Margaret M. (Bennert) Carroll of Lawrence and Seabrook Beach, N.H. He attended grade school at the Hood School in Lawrence and graduated from St. John's Preparatory School, Danvers in 1958. Following graduation, he attended Merrimack College. He entered Cardinal O' Connell Seminary in 1960 and later studied at St. John's Seminary. Father Carroll was ordained to the priesthood in May 29, 1968 by Cardinal Richard Cushing.

Devoted to ministry in the Merrimack Valley, all of his priestly assignments were in that area. His first assignment following ordination was to St. Patrick Church in Groveland (1968-1980) and later at St. Monica Parish in Methuen (1980-1992). While at St. Monica's he was recognized as Methuen's Man of the Year, he was Police Department Chaplain in Methuen where he gained a reputation for being effective with troubled youth, and served on the Board of the Henry C. Nevins Home, a position he was asked to continue to fill when he moved to Haverhill. When Father Carroll left Methuen, he was presented with a policeman's ring by the department, a gift he cherished, in recognition of his service and the stature he had gained with them.

As a life-long summer resident, and later a year-round resident, of Seabrook Beach, N.H. he had a lifelong love of the ocean. Father Carroll worked as a mate for Eastman's Fishing during his teenage years from the time he was 12. He later narrated whale watches for Eastman's Fishing and enjoyed bringing his nephew out on whale watches, as well as organizing a summer parish trip each year.

He was granted senior priest/retirement status in September 2010, but continued to assist at Our Lady of the Miraculous Medal Parish in Hampton, N.H.