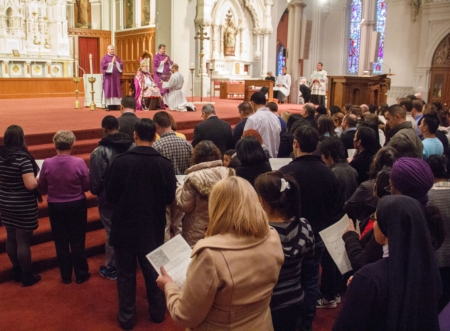 Catechumens, those who have never been baptized, and their godparents present themselves before Cardinal O'Malley at the 4:00 p.m. ceremony of the Rite of Election and Call to Continuing Conversion at the Cathedral of the Holy Cross, Feb. 17. Pilot photo/Christopher S. Pineo

SOUTH END -- More than 540 people preparing to enter the Church this Easter gathered at the Cathedral of the Holy Cross with family and supporters on the First Sunday of Lent, Feb. 17, for the Rite of Election and Call to Continuing Conversion.

Due to a large number of catechumens and candidates joining the Church, the archdiocese held two ceremonies for the different regions, West, North and South regions at 1:30 p.m. and 4:00 p.m. Central and Merrimack regions at 4:00 p.m.

Cardinal Seán P. O'Malley noted in his homily that similar ceremonies happened that day across the United States.

"Today it is a very special joy to welcome our new brothers and sisters in the Catholic Church. In the some 200 cathedrals in the United States, bishops are gathering today with this year's cohort of new Catholics -- adults who have been led by the spirit to join our community of faith," he said.

"There are about 150,000 who will be participating in the Rite of Election, on this the First Sunday of Lent, in the Cathedrals of the United States, so it is a very special day for all of us," he said.

In his homily, Cardinal O'Malley spoke directly to the catechumens and candidates.

"We welcome you and we thank you for responding to the call of grace that leads you to this commitment of discipleship in the Catholic Church," Cardinal O'Malley said.

He celebrated also the Catholic identity catechumens and candidates embraced that day by expressing to intention to join the worldwide community of the Church.

"We are more than one billion Catholics in the world. Don't worry, you are not going to have to learn all the names," he said.

"Catholic means universal, and that attribute certainly describes our Church and betokens God's universal love, which recognizes no boundaries or divisions, but simply one family of faith," he said.

After his homily, the cardinal began the Rite of Election.

First, the cardinal asked the godparents if the catechumens had faithfully listened to the word of God proclaimed by the Church, responded to the word by walking in God's presence, and shared the company of their Christian brothers and sisters while joining them in prayer. The cardinal then asked the catechumens if they wished to enter the life of the Church through the sacraments of baptism, confirmation and Eucharist.

The catechumens entered their names into the Book of the Elect, as the congregation sang "Amazing Grace."

"I now declare you to be members of the elect, to be initiated into the sacred mysteries at the next Easter Vigil," the cardinal told them.

In the Call to Continuing Conversion the cardinal asked if candidates had come to a deeper understanding of their baptism, reflected on the tradition of the Church, and advanced a life of love and service to others.

As the godparents had stood behind the catechumens placing a hand on the shoulder of each, sponsors did the same for the candidates, and responded, "They have."

Speaking to The Pilot afterward, Cardinal O'Malley said the laypeople in the Church should welcome new members of the Church through a focus on teaching the faith through example and Church programs.

The cardinal called on the laity already in the Church "to be cognizant of the opportunities that we have to invite people to be a part of the RCIA program, and also to be supportive of the new parishioners once they come into the Church, so they feel welcomed into a community that appreciates their presence and is grateful for their decision to become a part of our family of faith."

The cardinal also said the faithful need to witness and serve as examples by attending Mass and participating in the Eucharist.

"The fact that people are coming into our Church is a responsibility to receive them well, and to give them a good example, and support and encouragement in their faith," he said.

Some of those who participated in the rite shared their experience with The Pilot afterward.

"I just think it is really wonderful that everybody in all the United States and around the world was doing this at the same time. It just feels like a part of the community, you feel a part of something," Danielle Garvie, 29, a catechumen from St. Cecilia in Boston, said.

Fernando Bulaon, 34, of New York sponsored Garvie and made the drive from New York for the ceremony at the Cathedral of the Holy Cross. He said they communicated by e-mail as Garvie received catechization, and Bulaon received a refresher.

"She has actually taught me to reevaluate a lot of things that I grew up doing second nature, so it's a good way to reflect. She actually e-mails me her homework, and then I read it. I read all the same kind of discussions and discussion papers that they go through," he said.

"We had 14 catechumens and five candidates. It's great. The Spirit is alive man. You know it is, it's all the work of the Spirit," Father John J. Unni, pastor of St. Cecilia in Boston, said.

He said the process of preparing the candidates and catechumens to enter the Church has been a blessing to the parish he serves.