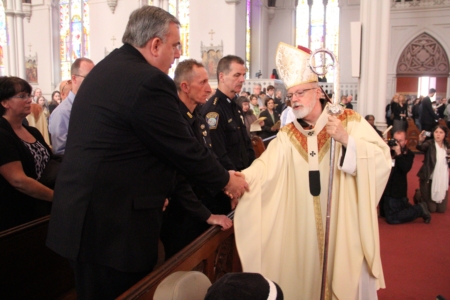 Archbishop of Boston, Cardinal Seán P. O'Mally shakes hands with Boston Police Commissioner Ed Davis after a Mass celebrated April 21 for the repose of the souls of those who died as a result of bombings at the Boston Marathon April 15. Pilot photo/Christopher S. Pineo

SOUTH END -- Cardinal Seán P. O'Malley celebrated Mass Sunday morning April 21 at the Cathedral of the Holy Cross for the repose of the souls of those who died as a result of the bombings at the Boston Marathon and in the subsequent violence.

"Some people here were among those injured and those who witnessed the terrible events that unfolded at the finish line of the Marathon, but everyone was profoundly affected by the wanton violence and destruction inflicted upon our community by two young men unknown to all of us," Cardinal O'Malley said in his homily.

Bombs exploded at the Boston Marathon April 15 near the finish line, wounding more than 260 and killing 8-year-old Martin Richard of Dorchester, Krystle Campbell, 29, a Medford native and Lu Lingzi, 23, a Chinese national who studied at Boston University.

A manhunt ensued after suspects Dzhokhar Tsarnaev, 19, and his brother Tamerlan Tsarnaev, 26, allegedly killed Sean Collier, 26, an MIT police officer in Cambridge. After a gun battle in Watertown, where police said over 200 rounds were fired, a "shelter in place" warning halted activities in multiple metro Boston communities.

At the cathedral Mass remembering the victims, photos of Collier, Campbell, Richard and Lingzi stood off to the side of the altar with flowers and candles.

The cardinal pointed to the consolation of Jesus the Good Shepherd, and the Christian emphasis on valuing every human life, as a source of healing from pain and tragedy such as the violent events started at the 117th running of the Boston Marathon.

"Jesus said 'they will strike the shepherd and the sheep will scatter;' that is what happened to His disciples after the Crucifixion, as they scattered in fear, doubt and panic," Cardinal O'Malley said.

"We too are scattered and need the assurance of the Good Shepherd, who lays down his life for us, who comes to gather us in, scattered in our brokenness and pain," he said.

He made specific calls in his homily -- and speaking with the press after the Mass -- to avoid a call for vengeance.

"We must be a people of reconciliation, not revenge. The crimes of the two young men must not be the justification for prejudice against Muslims and against immigrants," the cardinal said, in his homily.

"The Gospel is the antidote to the 'eye for an eye and tooth for a tooth' mentality. The parable of the Good Samaritan is the story about helping one's neighbor when that neighbor was from an enemy tribe, a foreign religion, a hostile group," he said.

"The individualism and alienation of our age has spawned a culture of death. Over a million abortions a year is one indication of how human life has been devalued. Violent entertainment, films and video games have coarsened us and made us more insensitive to the pain and suffering of others. The inability of the Congress to enact laws that control access to automatic weapons is emblematic of the pathology of our violent culture," the cardinal said.

He pointed out statements made by the suspects.

"One said he had no friends in this country, the other said his chief interests were money and his career. People need to be part of a community to lead a fully human life," Cardinal O'Malley said.

"As believers one of our tasks is to build community, to value people more than money or things, to recognize in each person a child of God, made in the image and likeness of our Creator," he said.

Cardinal O'Malley spoke about the importance of passing on the faith in a way that promotes love in good, moral and just lives for the faithful.

He referenced an observation by a holocaust survivor that doctors, nurses, scientists and soldiers participated in killing Jews in the Holocaust, showing that knowledge is not the only virtue, and how often in history science and technology served evil ends.

"We all know that evil has its fascination and attraction, but too often we lose sight of the fact that love and goodness also have the power to attract and that virtue is winsome," he said.

He said the effort to bring people back to faith must continue with a focus on countering evil by building goodness in society.

"I hope that the events of this past week have taught us how high the stakes are. We must build a civilization of love, or there will be no civilization at all," he said.

After the Mass Cardinal O'Malley told reporters he did not support the death penalty for the 19-year-old suspect.

"Forgiveness does not mean that we do not realize the heinousness of the crime. But in our own hearts when we are unable to forgive we make ourselves a victim of our own hatred. Forgiveness is part of our obligation as disciples of the Lord, who taught us that we must forgive the way that he forgave even from the Cross. Going forward, we don't know what his punishment will be, but obviously as a Catholic I oppose the death penalty -- which I think is one further manifestation of the culture of death in our midst," he said.

After attending the Mass with his family, president of the Boston Firefighters Union Local 718 Richard Paris commended the work of first responders and citizens during the crisis as he spoke with a group of reporters.

Luis Dinnella-Borregio, a first year seminarian at the Redemptoris Mater Archdiocesan Missionary Seminary who attends St. John's Seminary, also attended the Mass. He personally witnessed the impact terrorism has on a community when his New Jersey parish lost 12 of its own to the terrorist attacks of September 11, 2001. He called the homily by Cardinal O'Malley a necessity for the community of Boston and a message of truth.