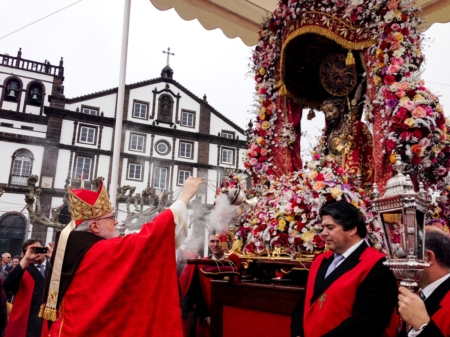 '...Pope Paul III sent the original statue to the people. He granted it, and gave them this statue of the Ecce Homo ('Behold the man') as a gift.' Pilot photo/CardinalSeansBlog.org

This year I was invited by Bishop Antonio de Sousa Braga to preside at the Santo Cristo Feast on the island of San Miguel in the Azores. I was accompanied by Father Walter Carriero of St. Anthony's in Cambridge, my priest secretary Father Jonathan Gaspar, and Father Kevin O'Leary the rector of the Cathedral.

We were there with hundreds of Portuguese and Portuguese-Americans from Cambridge, Hudson, Stoughton, Fall River and New Bedford who make the pilgrimage every year to Ponta Delgada for the magnificent celebration of Santo Cristo.

Friday, we arrived in time for the lighting of the city, which is just stunning. The procession, which lasts for about four hours, goes for miles through the city. The whole way, there are beautiful carpets of flowers and colored sawdust.

...Pope Paul III sent the original statue to the people. It was given to the Poor Clare nuns who visited him to seek his permission to establish the first convent on the island. He granted it, and gave them this statue of the Ecce Homo ("Behold the man") as a gift.

It is kept in the convent of Nossa Senhora da Esperanca that was once a convent of Poor Clares with over 100 nuns. Now, another order, the Concepcionistas, runs it and holds beautiful retreats and other events in the convent. It is a very beautiful place.

The devotion began when there were terrible earthquakes on the island in the early 1700s. The people made a procession with the statue, asking for God's protection. During the procession, another earthquake hit causing the statue to fall down, but when it hit the ground the earthquake stopped and the people proclaimed it a miracle. This feast has been celebrated every year since. It draws many thousands of people from the Portuguese-speaking world who travel to the Azores to participate.

There are number of Masses, all night vigils and processions that involve virtually the entire population of the island. As I mentioned, the procession stretched for miles and, on that entire route, there were crowds on both sides of the street. It was notable to see how people dressed up to attend the procession -- the way that people used to dress up to go to Mass. It was also impressive to see the quiet respect that they had. This is not a parade where you see people holding drinks in their hands and eating hotdogs. The people are there to pray.

There is also a penitential aspect to the feast. Many people make "promesas," pledges to the Lord, and many of them pass in front of the image on their knees or carry large candles.

It really is an extraordinary demonstration of the religious fervor of the Azorean people, and is celebrated by them wherever they are in the world. For example, this weekend St. Anthony in Cambridge will hold their own Santo Cristo Festival. On the way back, we traveled through Lisbon and visited the home of St. Anthony of Padua.