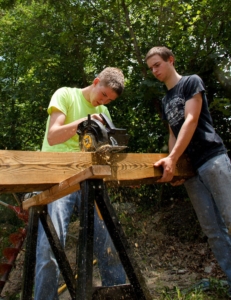 Sean Waclawik, 17, uses a circular saw modified with a chainsaw blade to cut a post for a Rosary walk, June 29 at St. Brendan Parish in Bellingham, with help from friend Chris Goguen, 16. Pilot photo/Christopher S. Pineo

BELLINGHAM -- The task before one young man who is dedicated to his Catholic faith is a matter of hard work that he can certainly handle, but he has seen others fail where he is determined to succeed.

Sean Waclawik, 17, started building a Rosary walk, June 29, at his home parish of St. Brendan Parish in Bellingham to earn the title Eagle Scout -- the highest rank attainable in the Boy Scouts of America.

For Waclawik, the project is a rite of passage -- testing his mettle in a trial of his leadership skills.

"This is the make-or-break of being an Eagle," Waclawik said.

Inspired by the Rosary walk at La Salette shrine in Attleboro, Waclawik's project requires organization, excavation, painting and even some sculpture. When completed, the Rosary walk at St. Brendan's will encircle a parking lot behind the church, with a cross just under 10 feet tall, posts with more than 300 feet of chain strung between them, wooden beads almost the size of footballs, and crushed rock keeping weeds from growing along the path.

The Boy Scouts of America website says that to earn the rank, a scout must plan, develop, and lead others in a service project helpful to the religious institution of his faith, the school where he studies, or the community in which he lives or comes from.

Waclawik said many Life Scouts, the rank before, miss their mark to become an Eagle Scout by not completing a final project.

The project chosen does not have to be as labor intensive, as involved or as original as the project Waclawik chose, but as an Eagle Scout candidate he must take on full responsibility for planning, directing, and following through on the construction to successful completion.

"The bigger the project, the more leadership skills I get to learn, the more experience I will get. So, it's almost like a self-benefit. If you overload in classes, you learn more than if you didn't," he said.

Waclawik said his peers expressed surprise that he took on such a labor intensive project.

"Some people I know that are doing their Eagle project, they do much smaller things that aren't as involved. Some people would say, 'Why are you doing such a huge project? You could have gotten your Eagle last year, and just done a smaller project that would have been a lot easier?' I was like, well, you know, part of it is that I really wanted to do something that would benefit the church and the community," he said.

The construction alone requires much work, sawing and sinking posts around a small parking lot behind the church, constructing a large cross with 6x6 beams, running thick chain between each post, and carving each of the beads using a lathe.

"I see it as a plus to have a big project, because I have learned so many things," Waclawik said.

For carving the beads, Waclawick and his father used a Shopsmith -- a table based power tool similar to a lathe -- they inherited from Sean's grandfather. When it started making unusual noises, they realized something was wrong. With no help, the father and son went about repairing the machine on their own -- another learning opportunity.

"I actually learned how to fix the Shopsmith, because we would open it up, take it apart, and we would be like, 'OK, we can see that's all grinded up. That's not good,' So, we would go and we would order that part," Waclawik said.

He actually started the project months before he broke ground at the parish. He organized people to help and acquired tools and supplies, while planning the project, and raising funds.

Waclawik created the plan with a budget of $1,000.

"This past November I went to four of the weekend Masses and gave a speech on what I was going to do in the project," Waclawik said.

"The next week, Father called me and said we went over," Waclawik said.

The community raised $1,200 for the Rosary Walk, which will complement an outdoor stations of the cross built for another Eagle Scout project years before.

"Your Eagle Scout project is like being project manager," Waclawik said.

"It's all supposed to be prep for the real world," he said.

The first day of construction he had friends digging with him, his younger brothers lending a hand, and his father moving earth with a Bobcat.

"This is giving him some really good experience. When you work on a project there is all kinds of unforeseen problems that arise, and you have to deal with it. You try to plan for them ahead of time, but you can't plan for everything," said Sean's father, Jim Waclawik.

Sean, who is home-schooled with a keen interest in computer science, is preparing for college, considering ROTC with the Air Force, and rides with a competitive cycling team in his free time.

His father said he stays busy.

"He's into all sorts of things. He's a hunter. He's into Boy Scouts, so of course he picks the huge Eagle project," Jim said.

As Sean prepared to use a specially modified chainsaw to cut a 6x6 for a post in the rosary walk, his father, a software engineer accustomed to managing projects, said he could see the experience coming in useful as his son becomes an adult and finds a career.

Father Mullen said when Sean Waclawik approached him about the Rosary Walk, he knew the young man had what it took to finish the task, based on watching him grow throughout his time as pastor to the Waclawik family over the years.